Welcome to the Venetica Wiki
Edit

The Venetica Wiki is a collaborative website dedicated to the 2009 Venetica video game, a fantasy-themed single-player role-playing game for Windows PC, PlayStation 3 & XBox 360. These articles are written by Venetica players and enthusiasts to help other players more fully explore the game world. Anyone can contribute. (Click here to see how you can help us improve and expand the Venetica wiki!)

The story of Venetica takes place in an alternate version of sixteenth century Italy, where magic is real.

Each generation, a new mortal successor is chosen to serve as Death, a physical being who acts as the Final Guide to the afterlife. But the most recent choice has nefarious plans of his own. Taking the knowledge he'd gained while being trained for his role as Death, and combining it with his own mastery of the dark arts of Necromancy, he contrived a ritual that disrupted the balance between life and death. This Undead Archon made himself immortal through a ritual of death, along with four useful allies. The current Death cannot act directly in the mortal world to thwart their vile plans, as they plot to make themselves as gods by breaking down the barriers between the worlds of the living and the dead, casting all into darkness.

The only mortal person capable of stopping the Undead Archon is a young woman, Scarlett, who lives a simple life in a peaceful mountain village. She knows nothing of these momentous events, nor does she know that she is secretly the daughter of Death himself, a child who should never have been conceived, but now is the world's only hope. Through her heritage, Death's own necromantic powers can be channeled into the mortal world, granting her powers of her own, and the ability to wield the only weapon that can harm the immortals. Though still young and untrained, Scarlett must cultivate and nurture her powers, with the help of the father she never knew, to save the world from the final spell that the Undead Archon is preparing to cast.

The story begins in the small mining town of San Pasquale in the Italian mountains, where Scarlett was raised. To fulfill her destiny, Scarlett must find an ancient weapon, the Moonblade, and make her way to Venice, where the Undead Archon and his allies rule with ever-increasing ruthlessness. Her enemies are powerful, and they are already seeking the threat they sense in her. Her allies are few. Scarlett's quest will take her far from mountain home to the great city of Venice, and from the depths of Venice's catacombs up to the heights of its royal Palace, and even on a brief excursion to Africa, before she can accrue the means and opportunity to finally confront her nemesis.

The player can also direct Scarlett's development as she grows into a worthy opponent for her undead foes. As she progresses through the story, Scarlett accumulates Experience, which earns her additional attributes and Skills which the player may assign to customize the character's abilities. Her talents can be customized to emphasize her physical combat skills or her necromantic spell abilities, according to how attributes are assigned and Skills are chosen. She also has plenty of choices for Weapons to wield and Armor to wear.

For those players interested in the role-playing aspects of the game, Scarlett will also face a number of moral choices in completing her journey. Those choices determine her personality. Under the guidance of the player. Scarlett has a choice of three different Guilds she can join. Her guild will both reflect and shape her outlook, activities and skills. The player may choose to make her helpful or selfish, honest or not, forgiving or vengeful, honorable or villainous.

For the more competitive, Venetica allows play at three difficulty levels, from Easy to Hard. It also supports the familiar Achievement or Trophy award system for demonstrating mastery of the game. 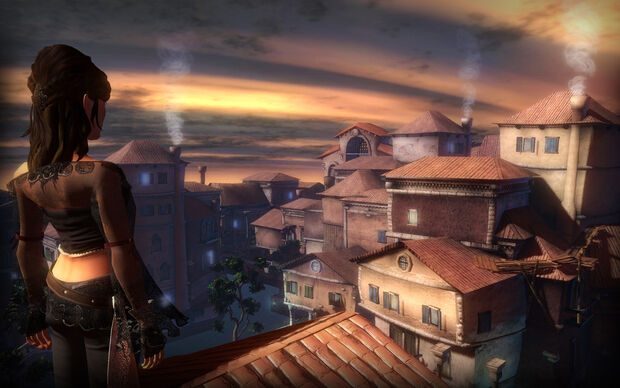 Venetica™ was developed by Deck13 and published by DTP Entertainment in 2009.

Retrieved from "https://venetica.fandom.com/wiki/Venetica_Wiki?oldid=7858"
Community content is available under CC-BY-SA unless otherwise noted.