As Scarlett pursues her goals, she will find several types of clothing and armor to wear that protect her from enemy attacks during combat. Many of these have distinct strengths and weaknesses.

When Scarlett first finds or purchases armor, it will not fit; she will have to get it customized by a tailor, seamstress, or armorer before she can wear it.

Armor reduces the damage done to Scarlett's Health by a successful attack. Different types of armor work better or worse according to the type of weapon (or creature) attacking.

Scarlett can select which armor to wear by selecting it on her Weapons and Armor Inventory page (among those armors she has found and fitted.)

Once obtained, armor lasts forever; it doesn't get damaged or wear out or require repair beyond the initial fitting. Armor doesn't encumber movement; Scarlett can still swim the canals while wearing (or carrying) Plate Mail.

Different armor styles have different strengths and weaknesses, depending on the type of weapon used by Scarlett's opponent. For purposes of armor effectiveness, weapons are classified as Blades (Swords and Scythes, including the Moonblade), Blunt (Hammers and Battle Axes), and Staff (Spears and Pole Arms).

(The price of armor increases once it has been altered to fit.)

Creatures seem to be classified as a weapon type according to their attack method.

When Venetica begins, Scarlett is wearing a plain, peasant white dress. It will soon become a tattered, soot- and blood-stained mess as Assassins attack San Pasquale.

This dress provides no protection in combat. 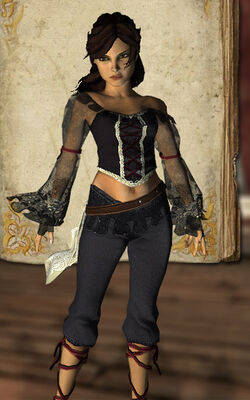 Scarlett's first task when she awakens the morning after the Assassins attack, her first official Quest, will be to get Proper Clothes. Mattheo will give her some Casual Clothes that belonged to his daughter (which Scarlett will have to fetch for herself from his house.) Once she has the clothes (unfitting), Mattheo will tailor them to fit her.

The Casual Clothes are a unique item obtainable only from Mattheo in San Pasquale. They can't be sold (or removed from Scarlett's Inventory.)

These Casual Clothes offer no protection in combat (though they are quite fetching.) 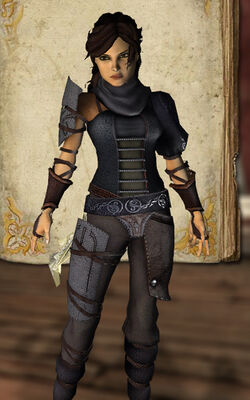 Scarlett may find Leather Armor (unfitting) on the bodies of one or more of the Dervish Assassins who attack her village, either in San Pasquale or in the Water Gateway. She may also find it on rogues or in chests. Either Mattheo (in San Pasquale) or Joanne (in the Outer City) can tailor unfitting Leather Armor to fit her so she can wear it, for a price of 500 ducats.

Leather Armor offer some protection in combat, and is the only armor that offers any protection against Staff (Spear) weapons, such as carried by Juma Warriors. 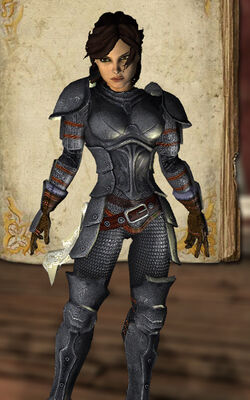 Scarlett may find Plate Mail (unfitting) on the bodies of one or more enemies who she slays in Venice. She may also find it as treasure in various chests. Either Mattheo or Lucio can tailor unfitting Plate Mail Armor to fit her so she can wear it, for a price of 2000 ducats. 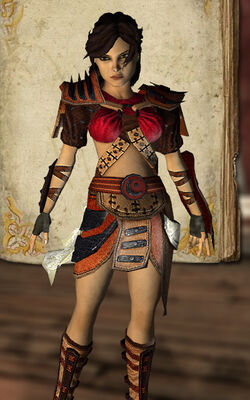 Scarlett may find Banded Mail (unfitting) armor on the bodies of one or more Persian Mercenaries who she slays in the Inner City or aboard the The Claw. She may also find it as treasure in various chests. Either Mattheo or Lucio can tailor unfitting Banded Mail Armor to fit her so she can wear it, for a price of 1000 ducats.

Banded Mail offer good protection in combat against Blunt weapons (War Hammers and Battle Axes, including Persian weapons), but offers no protection against other attacks. (It is very becoming on her, though, like a cross between a warrior and a belly dancer.) 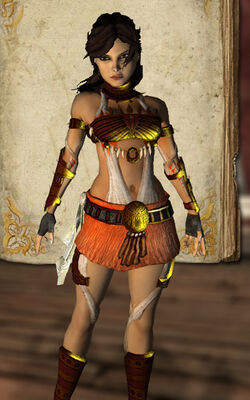 Scarlett may purchase Hunter's Mail (unfitting) armor from the Juma Tribeswoman in the Juma Tribal Lands, after she has confronted Princess Chiamaka/ Either Mattheo or Lucio can tailor unfitting Hunter's Mail Armor to fit her so she can wear it, for a price of 2000 ducats.

Hunter's Mail armor offer excellent protection in combat against Blunt and Staff weapons, and moderate protection against Magical attacks; but, it offers no protection against Blade weapons. (Scholars agree there must be some hidden enchantment for this armor to seem so intent on exposing what it's so good at defending.) 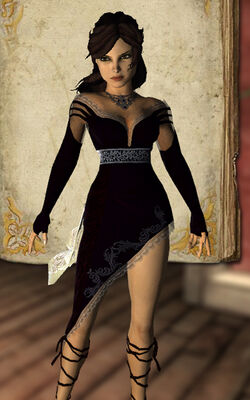 The Nethercoat is a specialized garment which Scarlett will have to work to earn. It's made by weaving the Dusk of the Dead into a dress, which, once the she has the Dusk, Jarta can make for her.

The Nethercoat offers protection against Victor's magical attacks (and surprising resilience to blunt weapons.) Scarlett will need the Nethercoat to enter the Palace for the first time, though she may prefer other armor while inside. It would be wise to use the Nethercoat for protection before entering the Throne Room to confront Victor in the finale.

Read more about the Nethercoat...

Shields come with certain weapons, specifically the various Spears Scarlett will find later in the game. These work in conjunction with the weapon's Block skill rather than with the armor. See Combat for more information.

Retrieved from "https://venetica.fandom.com/wiki/Armor?oldid=7851"
Community content is available under CC-BY-SA unless otherwise noted.