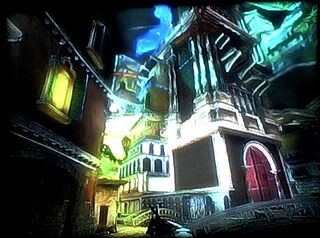 About the Arsenal District Edit

Venice's Arsenal District is the most complex and vertical of Venice's neighborhoods. Buildings of multiple architectures rise haphazardly to either side of the canals, climbing 100 feet or more into the sky. Large bridges span the gaps between canals, some great works of stone architecture, and some rather rickety and dangerous-looking makeshift connectors of wood. Naturally, the towering architecture above the streets leaves the lower levels deep in shadows, even in full daylight, and the sun rarely penetrates to the canal levels.

This vertical complexity makes the map of the Arsenal District rather complicated, with multiple vertical levels overlapping. The basic framework of the areas Scarlett will visit might best be described as twofold: first, the "ground" level, where streets run along the canals. Even this has two levels, one right at the water level, and another, the main level, elevated above it, where Scarlett first enters the district. The second area surrounds a long climb up towards the Palace, which begins with a long stairway ascending to a sequence of ramps, bridges, walkways, and makeshift passages forming a wide spiral climb to the top of the district.

Since the standard Venetica game map for the district is rather complicated, with some pathways right on top of other, lower pathways, and even doors sometimes stacked vertically above one another, in an attempt at greater clarity, we've divided the maps in half, first the lower levels, and then the climbing route, each removing elements from the other. For the lower level map in particular, we've added back in the streets and passages which are otherwise concealed by overhanging buildings.

Scarlett will enter the Arsenal District from the Inner City through the gate at the main street-level.

The Arsenal District's main level is actually raised above the canals, though frequent stairways allow easy movement between the Main level and the canal-level immediately below it. Streets generally follow the canals here, at both levels. Both levels are usually deep in shadow from the towering buildings which rise above them to either side. 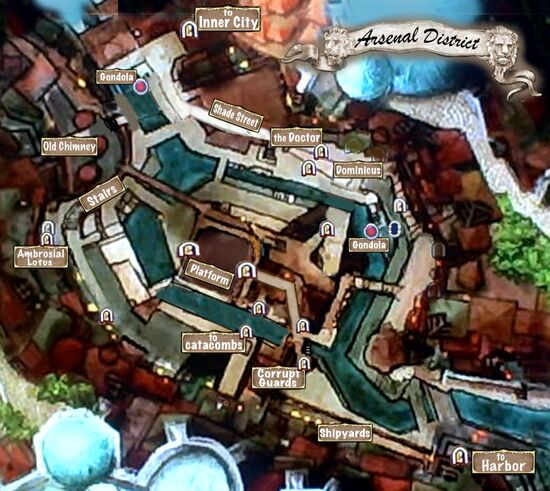 The entrance to the Arsenal District from the Inner City is in the northwest of the district. From here, at the main level, Shade Street proceeds eastward. Both the Stairs and the Platform provide assent to the upper elevations of the district, culminating at the gates to the Palace at the very top. The way to the Harbor leads to the east through the shipyard area, where the Doge is constructing his great sea fleet.

The deep shadows cast by the buildings climbing up the surrounding hills leave the lower levels of the Arsenal District in a sort of perpetual twilight, almost always hidden from direct sunlight. That makes it possible for Rogues to wander the streets at all hours, day and night.

The Doge has turned the streets over to Princess Chiamaka, and she in turn has unleashed the Juma Warriors of her native Africa. These remain mostly at the upper levels (probably because their Princess is staying at the Palace.) Their shields are strong, and their quick spears have long, deadly reach, making them dangerous opponents, especially in groups.

Later, Scarlett will find that Victor's Necromancers will also travel the streets, and Raging Ghosts, risen from the catacombs, will wander the shadowy streets as well.

Shade Street is the main passage through the ground level of the Arsenal District. Scarlett will find her adoptive brother, Leon, here, and he can offer her some hints on where to visit in the district, because apparently he reached it long before she did.

The Doctor (Gregorius) practices behind one of the rare doors that open off of Shade Street. He's the man to see if Scarlett needs a cure for something special (and she will.)

A familiar face, Dominicus, is now trading on Shade Street. He will remember Scarlett from the Water Gateway. Among other goods, he can now sell a shovel, which Scarlett will need in order to dig up a few things (and not just treasure.)

At the ground level, the Platform has two entrances, one facing the main Arsenal District, and the other facing its Shipyards area. It's possible to pass straight through this lower Platform between those two areas.

The Shipyards is a busy area where the Doge builds his vast merchant fleet. It is also the way to reach the Harbor district. To get to the Shipyards, Scarlett can pass through the Platform, or she can follow the canals below and use a ladder. Gaining access to the Shipyards will require getting past some corrupt Guardsmen, the Abandoned Honor quest. The first time Scarlett passes through the shipyards, she will meet Akbah, part of the Warning Akbah quest.

The Ambrosial Lotus is a house of ill repute operated by Kitten (who, Scarlett may recall, was described by Tusker as his boss.) Inside she'll find a few local citizens relaxing (or working.) The Secret Errands quest will eventually lead Scarlett here. (As will the Where's the Man? quest if she accepts it. She can also begin the Unpaid Service and The Lesser Evil quests here.) The Ambrosial Lotus's door is reached by passing through an arch under the stairway.

There are two Gondola Stations in the Arsenal District. This will be the first time Scarlett entered an area where the gondolas were accessible, though after her temporary alliance with Drago, they are now available in all areas she previously visited, even the South Shore.

A different Arsenal District rises above the canals and delicate bridges of the lower-level. This impressive vertical construction, free-standing and terrain-based, houses a number of interesting people and places. There are two ways to reach the upper levels of the Arsenal District: the Platform provides a direct elevator to the top for people and cargo; unfortunately, when Scarlett first reaches the Arsenal District, she will find the Platform closed and will need to take a long way up. That alternate route is an almost linear path starting at the Stairs, which soon becomes a series of ascending ramps and makeshift bridges. When Scarlett first arrives, the upper area is heavily patrolled by Juma Warriors who will not allow her to pass without a fight. (That route is marked in red on the map; click on map to enlarge.) 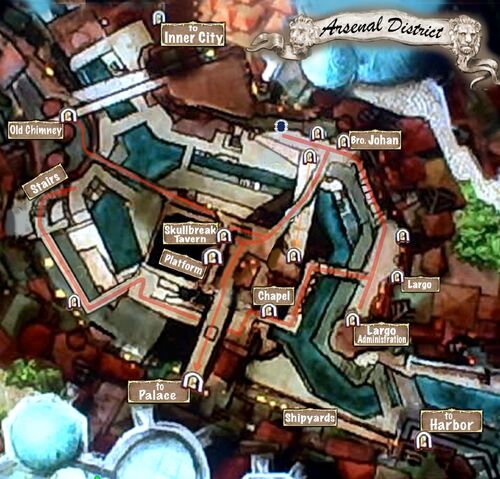 Starting at the base of the Stairs, the climb enters a covered, ascending corridor, then spills out onto a series of ramps and bridges eventually leading up to the Chapel. From there, the route continues over a ramshackle rope bridge to the Administration Area, where Largo runs the district. Another rickety bridge leads to a landing of residential areas, finally crossing the longest and most unsettling bridge all to reach the landing where the Platform would ordinarily carry visitors. From here, The Doge's Palace, Skullbreak Tavern, and the Old Chimney are all accessible (though only the Tavern will be open to Scarlett at first. (Scarlett won't be able to enter the Palace until after she has visited Africa, so be patient.)

When Scarlett first reaches the entrance to the Chapel, it will be clear that some magical curse blocks the entrance, forbidding her entrance. Later, she can obtain the Of Cursed Chapels quest from Brother Johan to get inside.

When Scarlett first reaches the Administration Area, she will not be able to get inside the offices to meet Largo, the district administrator. A Guardsmen blocks the door, and she will need a letter of recommendation (from Liora, as a reward for completing The Voice of the Dead quest. Also at that first visit, Scarlett will see that Brother Johan can't get in to see Largo, either.

The Skullbreak Tavern is a busy location directly adjacent to the Palace gates. The Inn Keeper offers a few words of advice and can sell some healthy and less healthy items. His only waitress, Medwyn busily hovers around but has little to say.

Scarlett can meet many interesting people here. Most notably, the noblewoman Liora hangs out here (though apparently she lives in the Palace.) Scarlett will need a substantial reputation to earn the noblewoman's trust, not to mention completing The Voice of the Dead quest.

Also here are a group of Rebels, who oppose the Doge's alliance with the Undead Archon. A group of out-of-work Laborers (who might make excellent miners back in San Pasquale if Scarlett accepted The Mining Effort quest.) And a couple of exiled Juma tribesmen who oppose Princess Chiamaka's alliance with the Undead Archon and will make excellent contacts.

The Old Chimney is an incinerator. The entrance is at the top, though its interior extends all the way to the lower levels. Scarlett will have to earn a special key to gain entrance, part of the Secret Errands quest she can eventually obtain from Largo.

The Catacombs are a maze of ruins and old construction that has been abandoned to the rising sea, hidden below the Arsenal District. Anyone venturing there is well advised to bring a lantern and a weapon.

Getting into these catacombs requires a special key, which Scarlett will have to earn from Brother Johan by fulfilling the Of Cursed Chapels quest. Entrance is through a door this time, and doesn't need any swimming, though that door is right at the canal level, south of the Platform (see lower level map, above.).

What Lies Beneath Edit

The subterranean mixture of old ruins is populated by some animated Skeletons, a few Grippers, some stray Raging Ghosts, and a few lost spirits of the dead. The Raging Ghosts are probably new to Scarlett, and quite dangerous until she realizes she needs to use The Passage to enter the Twilight World in order to fight them (Click on map to enlarge.) 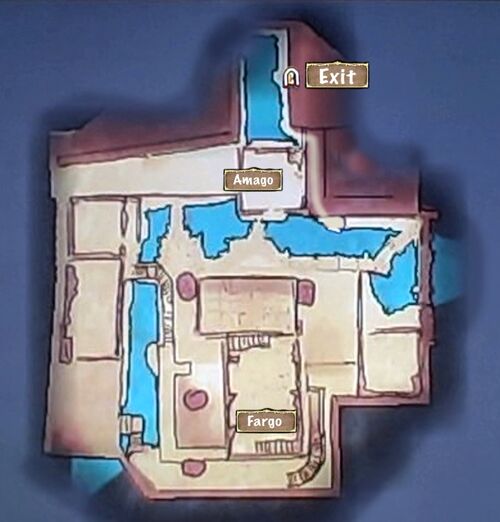 The Arsenal catacombs, like the district above it, provides a three-dimensional landscape to be explored. It's also considerably more compact than the previous city catacombs Scarlett has visited, with several sets of stairs ascending to the upper levels. It consists more of ruined buildings than waterways and caverns. There are a number of minor treasure items scattered throughout.

Besides a little scattered treasure, there are only two points of interest here:

The skeleton of Fargo, late husband of the Lady Liora, lies in the center of a ruined building. To reach it, Scarlett will have to go up a set of stairs, and then down into the buildings center. This will be part of The Voice of the Dead quest.

Another curiosity is the ghost of Amago. Unlike all other ghosts that Scarlett has and will encounter, Amago's location is not marked by his mortal skeleton. The ghost haunts a small room where they neat desk and chair in the center, and other than the less-ruined the state of that, there's no real clue that anything of interest lies here. But if Scarlett uses The Passage in that room, she will see Amago sitting at the desk. Speaking to him with The Whisper will introduce her to another teacher of necromantic skills.

Only one quest take place primarily in the Arsenal Catacombs:

Retrieved from "https://venetica.fandom.com/wiki/Arsenal_District?oldid=7993"
Community content is available under CC-BY-SA unless otherwise noted.