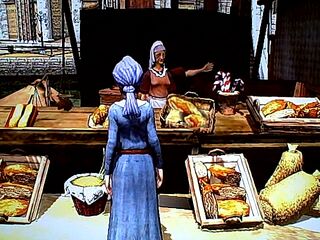 Merchants are the characters who can buy and sell goods. Some operate from shops or street stalls, others simply trade from wherever you find them. (All traders will buy anything, converting treasurer and loot into ducats. However, what goods they have for sale varies greatly. See their individual entries to determine what goods they can sell.)

How to Trade Edit

To trade with a Merchant, Scarlett should move close enough to the character so that the "Talk to ___" Contextual Action Prompts appears. By pressing the indicated button/key (usually the default Action button (X, A, or the Left-Mouse Button, depending on the controller), unless Scarlett has a weapon drawn). That action will cause the Merchant to begin speaking to Scarlett; the first time Scarlett speaks with any Merchant, the Merchant will first offer a brief overview of their business. One of Scarlett's possible Dialog Choices will be to "Trade". Selecting that will bring up a pair of Inventory screens. The one on the left shows the icons of items the Merchant has for sale; the one on the right shows either Scarlett's Items or Weapons & Armor Inventory.

Select an item from the Merchant's Inventory and press the action key/button to buy an item. A pop-up display will confirm the sale and optionally allow more than one of the items to be purchased, if available. Purchased items are added to Scarlett's Inventory and the costs deducted from her ducats. (Scarlett can only make purchases with ducats. She can convert any additional loot she has collected into ducats by first selling it to the same Merchant.)

A few Merchants specialize in certain kinds of Loot, and will give Scarlett a better price for those items. They all seem to be in the Outer City.

A sale to a preferred trader (always for twice the running price) is indicated by an asterisk in front of the price in the Journal, as shown in the Stone Lilliy example to the right: Normally, this item sells for 20 ducats, but Master Deimos pays 40.

Any items Scarlett sells to a Merchant will remain in that Merchant's Inventory, so Scarlett can return later to that same Merchant to repurchase the item, if necessary. (Since Venetica doesn't have any encumbrance or limit on the size of Scarlett's Inventory, there's rarely a need to sell an item you think she may want later. Since Venetica has no penalty for encumbrance of maximum number of items in the Inventory, there's usually no reason for selling and then buying back an item, and Scarlett will lose money on the double transaction.)

There are a few exceptions to the buy-back option: Akbah is only a Merchant for a short time, Jose can be killed, and Rufus will switch locations; items sold to them previously will disappear from the game at those times.)