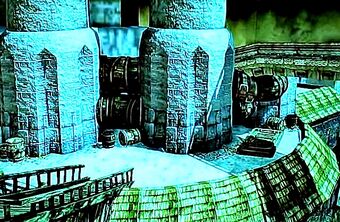 Scarlett needs to Get to the Black Grimoire before the Undead Archon's minions and take it to the Old Chimney in the Arsenal District to destroy it.

Getting the Quest Edit 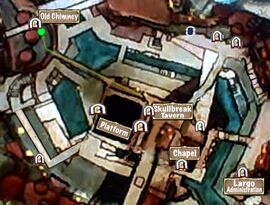 To get there, Scarlett can take The Platform to the top of the Arsenal District, then go around or under the final flight of stairs leading to the Skullbreak Tavern, then head across an arching bridge (dealing with the Flying Beasts that hover above the bridge.) The door to the Old Chimney is in the roof and leads to a steep, narrow stairway leading down. (Click on the map to enlarge it.)

Inside the Old Chimney, Scarlett will need to deal with more Flying Beasts that infest its upper level. If she circles the chimney at the top, she will find Sophistos's skeleton. Using The Passage, combined with The Whisper, Scarlett can finally speak directly with the old necromancer. He will tell her the long story of the Black Grimoire (and refuses to be sidetracked.)

Sophistos's ghost tells Scarlett that he built the Chimney specifically to be hot enough to burn the cursed book, but never did it. Instead, he hid the book by burying it. This gives Scarlett the quest to get the Black Grimoire from where Sophistos hid it and then burn it in the fires of the furnace below.

Scarlett should pick up a scroll with instructions on operating the furnace, and Sophistos will give her a map to where he buried the Black Grimoire.

Scarlett will need a shovel to dig up the book from where Sophistos buried it. Fortunately, Dominicus has one for sale at his small stand outside The Doctor's office on Shade Street of the Arsenal District.

Sophistos did not destroy the Black Grimoire. Scarlett must chase it down and destroy it herself.

According to Sophistos, the Black Grimoire is buried in a garden at the Pale Lily Villa (also called the Eastern Estate or Castello Mansion.) It's on an island, so Scarlett should return to the canal level of the Arsenal District and have Gondolier take her there. (Stop to buy a shovel from Dominicus on the way if she doesn't already have it.) (Click on the map to enlarge it.) 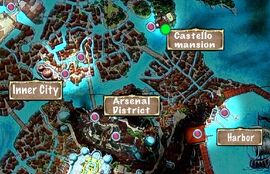 As soon as Scarlett reaches the Castello Mansion, it will be obvious things are not right, because there are bodies lying everywhere. The place is infested by a dozen Lectors. The garden is at the northeastern part of the island, but the gate to the courtyard is locked with a "special key".

The key to the garden courtyard is upstairs with the landlord in his bedroom, which is behind one of two closed doors from his private chambers in the eastern part of the mansion (the other door leads to the balcony over the courtyard, and is locked). When Scarlett enters the room, she will find a Necromancer killing the landlord. After Scarlett has defeated the Necromancer, she should search the landlord's body to get the key.

Once she has the key, Scarlett can go to the courtyard (via either upstairs or downstairs doors.) There are five Lectors searching here. The center of the courtyard is dominated by a statue of a lion. This is one of the Living Statues that will yield a Pale Heart if killed. It may or may not animate at this time, depending on Scarlett's Experience. (Just in case, it would be best to deal with all the Lectors before approaching the statue; it's awkward dealing with both enemies at the same time.)

After clearing the area of Lectors and any other opponents, Scarlett can consult the map Sophistos gave her. The treasure is buried behind the statue, midway between the statue and the tree at the back of the courtyard. To dig it up, Scarlett should stand at the spot. Use the Inventory to select the shovel and press the action key, and Scarlett should toss a few shovelful's of dirt and then announce "Treasure Found". (If it says "nothing found", adjust her position slightly and try again.)

Once Scarlett has the long sought-after Black Grimoire in her inventory, she should return to the Gondolier and head back to the Arsenal District. Return to the Old Chimney. 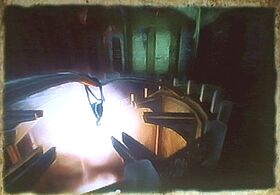 Take the stairs inside the Old Chimney down. When she passes the burning grate, step onto it and throw the Black Grimoire onto the grate. Then continue down the stairs to the furnace. There are four valves along the furnace wall (unnumbered, but called 1-4 from left to right.) The sequence to activate them is given in the "machine instructions" from the scroll found on Sophistos, which should now be in Scarlett's Journal. (3-2-4-1)

After igniting the furnace, Scarlett can go up and watch the Black Grimoire burn. Sophistos's will object to this and attack! Scarlett will have to defeat the old man, surprisingly spry in his afterlife. Defeating Sophistos's ghost complete the quest.

Just finding Sophistos in the Old Chimney Burns Scarlett 400 points for her Experience, and just getting the quest adds another 400 points.

Completing the quest (burning the Black Grimoire and defeating Sophistos) adds another 1000 points to Scarlett's Experience (plus 80 points each for Lector killed, and 150 points for killing the Necromancer). (No change to her Reputation.)

The Black Grimoire is destroyed. Congratulations!

Still, Scarlett's work is not yet complete…

Retrieved from "https://venetica.fandom.com/wiki/Chasing_the_Black_Grimoire?oldid=7507"
Community content is available under CC-BY-SA unless otherwise noted.