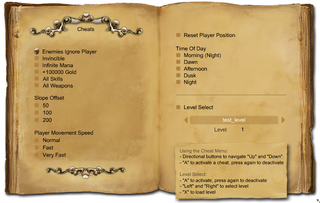 Venetica appears to have several cheat functions that can be accessed in-game. Examination of the files reveals a SWF file, .../media/shared/flash/cheat_menu.swf, rendered by a Flash player as shown to the right.

It is presently unknown how this cheat menu is accessed, although it appears as if some form of scripting is involved (the game uses lua [1] as its scripting language). Some script snippets have been found by astute users, and their use is shown below (i.e., submission by R.M.)

presumably correspond to the Cheat Menu's functions All Weapons and Invincible, respectively, we can expect similar script functions to map to the other options in the Cheat Menu, perhaps Cheats::givePlayerSkills() to enable all skills? After all, the file .../media/lua/Venice.bin contains a number of interesting strings that seem to relate to cheat functions:

There is room for experimentation, for analysis of files, for reverse-engineering, and most importantly, for finding out how the cheat menu is activated.

(not that Venetica would need cheating...)

Use a text editor to edit the "keybinds.ini" file in the "game" directory.
Add the following lines to the file:

Then, press one of the following keys during game play:

If you want specific weapons rather than all, follow the format for the armor. Item names can be sourced from
\media\shared\textures\gui
That folder contains the inventory icons for items, which contain their reference name. So for example
item_armor_african_icon.dds -> give(_N("item_armor_african"))

Following R.M.'s idea, the lua cheats can be assigned to function keys, too. For example, adding the following line to the "keybinds.ini" file

toggles God mode with the F2 key. Not all cheats are consistent. For example, God mode is sometimes canceled after cutscenes.

The following cheats have been tried in this fashion:

Retrieved from "https://venetica.fandom.com/wiki/Cheats?oldid=7638"
Community content is available under CC-BY-SA unless otherwise noted.