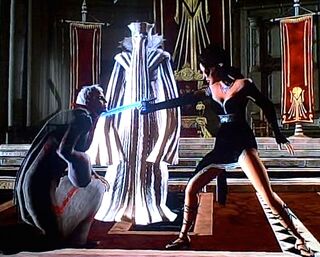 During her quest, Scarlett will be confronted by many enemies who have lethal intent, including Creatures, the Undead Five, and their Minions. To carry the day, she will have to either fight them or avoid them; and even if she wants to avoid them, often that just isn't possible. (Besides, Venetica offers Scarlett Experience for killing enemies, not for avoiding them. It is perhaps appropriate for Death's Daughter that killing her makes her stronger.)

Combat in Venetica is relatively simple. Scarlett can attack close opponents in front of her with one of a variety of Weapons by swinging that weapon. There are no long-range weapons such as bows or thrown objects. (Although bow do appear in a couple of cut scenes.) The only long-range attacks are performed with Necromantic Spells, which Scarlett must learn in order to cast.

Scarlett can increase the damage she does with a Weapon by learning specific Weapon Mastery Skills with each class of weapon, or by combining her Necromantic Energy with the attack.

Scarlett can defend herself by wearing any of several types of Armor (once she has found or purchased it and had it fitted.) She can also maneuver to dodge or roll away from enemy attacks. She can learn a Blocking Skill to parry enemy blows.

Before she can swing a weapon, Scarlett must first draw the weapon. The player does this by pressing the appropriate button (RB, R1, or E). (Pressing it a second time will sheath the weapon again.) That will draw the current default weapon of the current weapon class.

There is no time penalty for switching weapons. Activating the Inventory screen pauses play and the change is instantaneous.

Scarlett can choose a weapon best suited against her opponent, taking into account both the enemies' Armor and the speed of the enemies' weapon. (Scarlett would be advised to select her Armor based on the opponent's Weapon as well.) 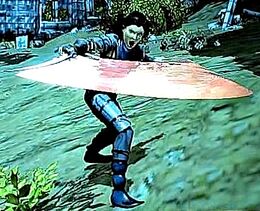 To actually strike an enemy with a weapon, Scarlett must first move close enough to the enemy and face them. Then, the player can press the Action Key to cause Scarlett to swing the weapon she is holding. The blow does damage (reduces the enemy's Health) based on a number of factors:

Armor (or natural protection of Creatures) can reduce the damage inflicted by a Weapon. Different forms of Armor offer varying protection according to the type of weapon used to attack it. For this purpose, weapons are classified as Blades (Swords and Scythes), Blunt (Hammers and Battle Axes), and Staff Spears.

Scarlett would be wise to choose her current Armor according to the class of Weapon her opponent is using. Likewise, she select her current Weapon to be most effective against the Armor worn by her current opponents.

Different categories of weapons have different speeds. This affects how quickly Scarlett can wield the weapon or perform multiple-attack Combinations. Swords and Spears are faster than Hammers and Battle Axes. This can be important, depending on the number and speed of Scarlett's opponents, because if Scarlett is struck while performing an attack, her own attack is spoiled.

A weapon's reach affects how close Scarlett must get to attack an enemy and how many enemies she can strike with a single blow. Spears and Hammers and Battle Axes have a long reach and can simultaneously damage multiple enemies, while Swords and the Moonblade have a shorter reach and affect fewer opponents.

Scarlett can move in combat to avoid being struck herself and to position herself to attack her enemies. Basic movement is the same as outside combat (using the joystick, if available, or W, A, S & D keys.) Obviously, it's advantageous to attack an enemy from the flank or rear, where the enemy cannot strike back nor block the blow. 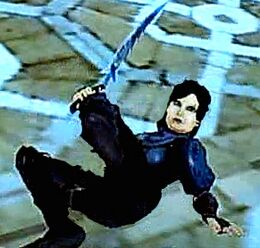 Scarlett can dodge and roll, other to the side or backwards, by pressing the Roll button (Space, X, or []) along with direction control (using the joystick, if available.) This causes Scarlett to dock and role in the indicated direction, avoiding the blow.

A "Lock on Target" feature causes Scarlett to always face one particular enemy. When that button (LT or L2) is pressed and held, however Scarlett moves, dodges, or roles, she will always be facing that enemy; repeated dodges to the side because Scarlett to circle the enemy. This is helpful to the player, who doesn't have to adjust Scarlett's direction after a maneuver.

If there are more than one enemy in range, the game automatically chooses which enemy is the target. Using this against multiple combat opponents can be risky, because circling one enemy may cause Scarlett to move directly into the blow of a second enemy.

Scarlett (and the Player) can practice this technique using Don and Nesto as Sparring Partners.

Lock-on is not available if Venetica 's difficulty setting is set to the highest level of difficulty.

The number of attacks in a combination is limited by Scarlett's Level of Mastery with the Weapon she is using. This is based on the Weapon Mastery Physical Skills: Moonblade Mastery (Scythe), Sword Mastery, Hammer Mastery, and Spear Mastery. Initially, Scarlett can perform a two-attack combination with the Moonblade, Sword, or Spear; she can only strike a single blow with the Hammer or Battle Ax weapons class. Each Level of Mastery Scarlett learns with the weapon increases the number of attacks in the combination sequence by one, up to six with the Moonblade, Sword, or Spear, or up to three with the slower Hammer or Battle Ax.

A Combination Sequence can be disrupted if Scarlett is struck by an enemy blow or spell during the sequence, or if the player mis-times the blow.

Scarlett (and the player) can practice this technique using Yngvar as a Sparring Partner. 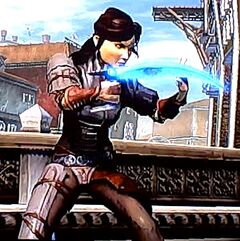 Scarlett can learn a Physical Skill to use her Weapon to Block attacks from her opponents. Scarlett may choose to Block instead of Attack if she needs time to maneuver during combat. Blocking can also be followed by an effective counter-attack or Riposte.

The Blocking Physical Skill is learned separately for each Weapon Types (Scythe, Sword, Warhammer, and Spear). Not all Weapons can be used to block all other Weapons: e.g., a Sword or Moonblade can be used to Block a Sword but not a Warhammer. The Spear weapon class comes with a matching Shield that is effective in Blocking all Weapon Types.

Scarlett (and the player) can practice this technique using Rangar as a Sparring Partner. Completing this practice session earns the Trained Blocker Achievement / Trophy.

There are several Physical Skills associated with each Weapon Class that allow Scarlett to channel her Necromantic Powers through the weapon to do additional damage on her enemies. For example, when using the Moonblade, Scarlett can cause a Deathburst, and while using a Spear and Shield, she can cast Spear Fury.

These specialized spells are listed under Physical Skills, even though they involve using Mental Energy). To invoke them, Scarlett must currently have a weapon of the appropriate class drawn in hand (and have learned the specialty Physical Skill and have sufficient current Mental Energy remaining.) Unlike Mental Skills, most of these Weapon-bound Physical Skills have no Casting Time, so they can be invoked quickly and aren't disrupted by enemy attacks.

The player will have to place the Physical Skill on the QuickBar to map it to a particular button or key that will be used to invoke it.

Most of Scarlett's Mental Skills are useful in combat for inflicting damage on her enemies. She can cast these Necromantic spells even while holding a weapon in her hand. However, most Mental Skills have a significant Casting Time. If Scarlett is struck by an enemy while attempting to invoke a Mental Skill, the spell is ruined; the Mental Energy is lost, but the spell itself is spoiled. Therefore, Scarlett will probably need to back away a bit from her enemies before attempting to use her Necromantic Powers.

The player will have to place the intended Mental Skill on the QuickBar to map it to a particular button or key that will be used to invoke it.

In many cases, Scarlett may have alternatives to fighting. While Venetica will require that she fight many of her enemies (including the Undead Five), others can simply be prudently avoided, if she wishes.

For example, the Rogues of the Outer City and Inner City only wander the streets at night. If Scarlett spends the evening hours sleeping in a bed, she need never deal with them. Once Scarlett has learned to use the Mental Skill The Passage, it will also be easy to bypass both and by simply slipping into the Twilight World until she has moved beyond them. At several points in the story, Scarlett will be able to speak with characters (e.g. Prince Veridor, Tusker, the kidnappers in the Heir to the Mansion quest) and have a choice whether to pick a fight or be conciliatory.

The disadvantage of avoiding combat is that killing enemies is a major source of Experience for Scarlett.

Near the end of the story, Scarlett's total kill count seems to figure in the determination as to whether she has been Honorable or Villainous.

Of course, there's no guarantee Scarlett will win every fight. If things go badly, she should not underestimate the value of simply running away (possibly starting with a backwards dodge and role.) If she finds herself surrounded or cornered, The Passage will usually give her a simple escape (though if she is surrounded by enemies with fast weapons, she may not have enough time between blows to cast the spell.) In the worst case, if Scarlett is killed, our relationship with Death will simply take her briefly to the Twilight World until she returns to life (assuming she has Twilight Energy remaining.)

Two enemies are more dangerous than one, and four or more can be downright lethal.

Intelligent opponents will try to surround Scarlett. If they succeed, they can all attack her simultaneously, increasing the pace of their blows so she cannot respond with Combinations or Blocking or Necromantic Spells before an enemy's blow disrupts her actions, and she may not even be able to run away.

If Scarlett joins the Order of the Holy Seal Guild, Rangar will offer advanced training in fighting multiple opponents inside the Guildhall. His advice is simple: keep moving to avoid being surrounded, stay away from obstacles such as walls or, Death forbid, corners. Try to flank the group of enemies and strike at them one or two at a time. A fast weapon with a long reach, such as a Spear, is preferable because it can strike multiple enemies with a single blow. Since even badly hurt enemies can still kill her, concentrate on finishing off and already-wounded enemy, if possible. Rangar can provide Scarlett with from the Guild to practice these techniques. Completing this practice against four opponents will earn Trained Group Fighter Achievement / Trophy.

Scarlett can also practice against multiple Juma Warriors in the Necropolis as part of the tournament Gero runs (See the Let the Games Begin! quest.)

Retrieved from "https://venetica.fandom.com/wiki/Combat?oldid=7903"
Community content is available under CC-BY-SA unless otherwise noted.