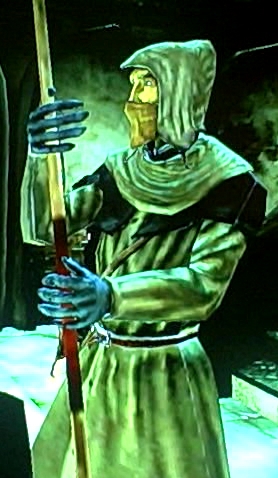 Gondolas are the heart of Venice's transportation system, carrying passengers through the canals, all around the city, day or night. The steadfast Gondoliers have their own Guild, of sorts. In fact, in addition to their obvious service of providing rapid transportation, their guild maintains a bit of a secret society of their own, acting together for the benefit of Venice's citizens.

When Scarlett first arrives in Venice, she won't be able to find a gondola to ride. All that will change after she meets Drago, a Gondolier who will help her when she finally gets a board Hector's great warship, The Claw.

Venice's gondola system provides quick and restful travel between key point in the city. It even reaches across the Bay to the South Shore. (And most important to *Venetica*'s players, it provides quick transport in real-time, without having to traipse through the streets and load different areas.)

After completing Chapter 2, Scarlett will find that every Gondolier in the city will take her to any gondola station she wants, from the Southern Bay to the Harbor, as long as she has already opened access to the area. (For example, Scarlett will have to walk into the Arsenal District the first time she goes there, but afterwards, she can hitch a ride on a gondola to get there again; likewise, she'll have to earn her first visit to the Harbor on foot before she'll be able to request arrived to a gondola station there. Those stations just don't appear as available destinations until she has earned access elsewhere.)

A couple of destinations, such as the estates on the islands, can only be reached by gondola, since there is no footpath. These destinations will become accessible to Scarlett one she has a quest log entry requiring her to reach one of them. Access to the Eastern estate (Costello Mansion) is granted during the Chasing the Black Grimoire quest. Access to the Western estate (Sara's Estate) becomes possible after the Heir to the Mansion quest. 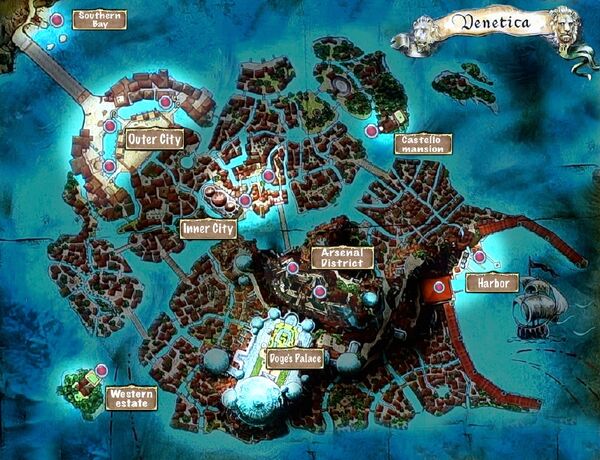 "We boatmen are not all as we seem. The Gondoliers are the oldest order of Venice, and for years we've cared for the people, doing what needs to be done to help and protect them." -- Drago

As the story progresses, it becomes clear that the Gondoliers are more than what meets the eye. As Drago explains, for years, they have cared for the people. In two cutscenes, we see Gondoliers looking at options to fight the Persian occupation. Drago takes an active role in stealing medical supplies from the Persians. Moreover, Gondoliers appear to have a close connection with The Net of the Mask, or at the minimum, they are admirably knowledgeable in necromancy. The first Gondolier that Scarlett encounters is Edmundo, who claims to be a member of the Net of the Mask, but dresses in typical Gondolier garb. Late in the story, we see Gondoliers, led by Aeris, involved in using a necromantic spell to weaken those Juma Warriors who hold Leon prisoner (provided that Scarlett joined the Net of the Mask). Finally, San is assisted by a group of apparent Gondoliers in the transmutation of the Pale Hearts. The exact nature of the Gondolier's Guild, however, is never revealed.

Retrieved from "https://venetica.fandom.com/wiki/Gondoliers?oldid=7673"
Community content is available under CC-BY-SA unless otherwise noted.