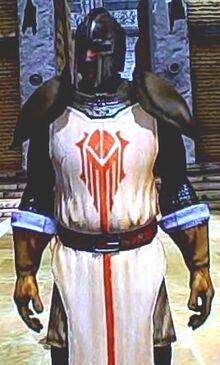 Whether in the Outer City, Inner City , or the grounds of the Doge's Palace itself, Venice's loyal Guardsmen are on patrol, to serve and protect the citizens, and enforce the Doge's laws.

In some places, they may block passage for those who haven't yet proven they are worthy of trust. (E.g., only selected citizens are allowed to enter the Trading Center or Amphitheater areas of the Outer City.) During daylight hours, these brave men can be seen patrolling the streets and marketplaces of their district. At night, however, or when ordered by the Doge, they may leave the streets to whoever is brave enough to walk them, and honest citizens had best remain in their homes.

In fact, should a Guardsman see Scarlett fighting, e.g. Rogues on the street, he is duty bound to come to her aid. (This is a mixed blessing, for while a guardsman may dilute the attacks of multiple opponents, they are also likely to hamper Scarlett's maneuvers as she dodges and rolls.)

Of course, in any group there are rotten apples. A few guardsmen are corrupt, accepting bribes, or worse, plotting to exploit the citizenry.