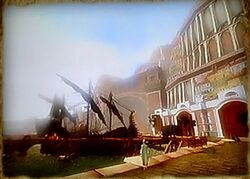 In the sixteenth century, Venice's port at the northern end of the Adriatic Sea let its merchant fleets sail throughout the Mediterranean, and even into the Atlantic, bringing it exotic goods from all over the known world. The portion of the Great Harbor that Scarlett can explore is more limited.

To reach the Harbor the first time, Scarlett will have to come through the Arsenal District and complete the Abandoned Honor quest. The entrance follows a long, shadowed path beneath the great canopy of the Dockyards, where she might be tempted to use a lantern even in daylight. Once she has reached the Harbor, she'll be able to take advantage of two Gondola ports there to travel to and fro more quickly.

There are three warehouses along the pier. The first (eastern) warehouse may contain a creature Scarlett has never seen before, but will again. The final (westernmost) warehouse needs a special key, and Scarlett won't be able to access it until she receives the Bad News quest.

The Lighthouse as a signal fire on top that can be lit at night to guide ships enter port. Scarlett can go inside, climb the stairs, then take a ladder to the very top, to see some spectacular views of the Harbor. 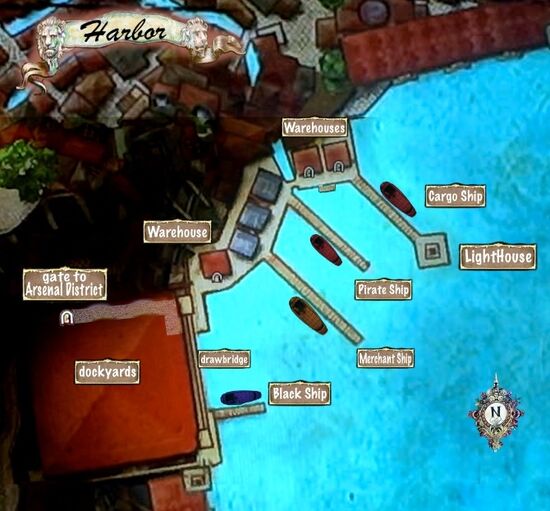 When Scarlett first arrives at the harbor, she will find four ships are docked at the piers: A Venetian Merchant Ship, a Pirate Ship, a Cargo Ship, and the Black Ship (she can't initially reach the latter.) Some ships will disappear later in the story, depending on Scarlett's actions.

The Black Ship, indeed, the whole southern quay, won't be accessible when Scarlett first arrives at the Harbor; a huge drawbridge, protected by some Guardsmen, block access. That's southern area will only become accessible after Scarlett returns from Africa.

Once Scarlett has returned from Africa, she will find Captain Ayo waiting on the dock in front of the Black Ship.

Ruben, a drunk Scarlett may have encountered back in the Outer City Trading Center, reappears, offering through slurred speech to sell Scarlett information on finding a treasure.

There are no Quests that originate in the Harbor. The following Quests have significant ties to the Harbor area:

Retrieved from "https://venetica.fandom.com/wiki/Harbor?oldid=7936"
Community content is available under CC-BY-SA unless otherwise noted.