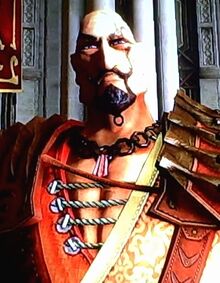 Hector is leader of a fleet of Persian ships and armies. He is also one of the Undead Five made immortal by the dark, forbidden magics of the Undead Archon.

Hector makes his headquarters aboard the flagship The Claw, which is anchored in the waters of Venice. Victor has given him responsibility for searching Venice's Inner City for the unknown, dangerous mortal who may still pose a threat to the Undead Five, and The Doge has granted Hector's Persian troops authority to supplant the city guard there.

Hector reveres the memory of his mother, whose ashes he carries with him aboard his flagship. He also has a nasty temper.