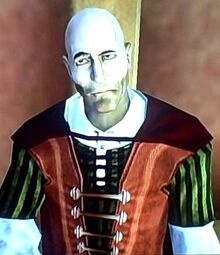 The Hooded Wings is a guild of messengers who transport various letters or packages from one part of the city to another, no questions asked. They value obeying orders, regardless of what's being delivered to whom.

Scarlett can discuss joining the Wings with Master Deimos at the Hooded Wings' Headquarters, by the garden in the eastern part of the Outer City.

The guild is a source of Storm Potions, which increase speed for a period of time. 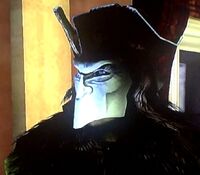 If Scarlett joins the Hooded Wings, she will be told assignments are managed by a masked fellow named Grimm down in the basement, where the Guildhall has direct access to the Inner City Catacombs.

In order to become a member of the Wings, Scarlett will need to complete one initial delivery as a test:

After joining the Wings, Scarlett may choose to request other "delivery" Quests from the guild (Grimm), to increase her experience or reputation:

Scarlett can then get one or the other of these two mutually-exclusive Hooded Wings Quests, depending on whether she asks questions at the end of the Signal Fires quest:

Regardless of which Guild Scarlett joins, her guild will be involved in the following quests:

Retrieved from "https://venetica.fandom.com/wiki/Hooded_Wings?oldid=5851"
Community content is available under CC-BY-SA unless otherwise noted.