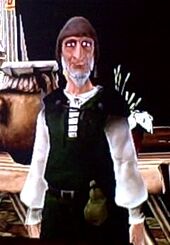 Inar is one of the many merchants with a stall in the Marketplace of the Outer City. He sells fresh fruit: apples, pears, sweet pumpkins and vegetables. Healthy eating, if Scarlett finds herself with a case of the munchies. (Foods such as fruits also have some minor restorative properties to her health.)

Like most of the outdoor traders in Venice, Inar can only be found at his store during daylight hours. Honest citizens return to their homes at night, leaving the streets to rogues or marauders or whatever evil lurks in the shadows.

If Jose, the bartender of the Tavern in the Inner City, is killed, Inar will replace him (and replace most of the menu with apple products, including his Apple Wine.)

In addition to being a wonderful source of nourishing vitamins and minerals, each of these food items can also restore a 20 points of Scarlett's Health when consumed.

Like other merchants, Inar can also buy unneeded items Scarlett wishes to sell, converting them to ducats she can spend on more useful items. (He will also be able to sell back to Scarlett any items she previously sold to him, though at a substantial markup price.

Inar can be found in the east side of the Marketplace during most daylight hours.

Retrieved from "https://venetica.fandom.com/wiki/Inar?oldid=7223"
Community content is available under CC-BY-SA unless otherwise noted.