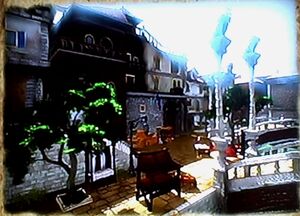 When Scarlett first enters the Inner City, she will soon learn that things are changing there. Victor has convinced the Doge to turn control of the Inner City over to Hector, allowing his Persian Mercenaries to replace the usual city Guardsmen. They are still searching for the mysterious stranger who threatens their plans, without yet having identified Scarlett as that agitator. Hector's flagship, The Claw, will row in through the canals to dock just off the Persian Trade Center.

Scarlett's main goal when she arrives in the Inner City will be to reach Sophistos, who knows the fate of the Black Grimoire. Nox has told her that Sophistos has been taken prisoner aboard The Claw. And so she is seeking The Pathway to the Claw.

Many of the citizens of the Inner City will be useful to Scarlett as she struggles against the Undead Archon:

Aeris, now at the Net of the Mask guild hall, will be able to teach Scarlett new necromantic Mental Skills, regardless of which Guild Scarlett joined. And if Scarlett has joined the Net, she also has optional Quests to offer on behalf of the guild.

Just as Scarlett is entering the Inner City, she will see (cut scene) Eliana pleading with some Persian Mercenaries for the life of her husband, who is being arrested (while protesting his innocence, naturally.)

Tusker is an untrustworthy rogue, not really the kind of person Scarlett would want to put her trust in. Still, when she meets him in front of the Old Cathedral, he may be able to get her aboard The Claw (part of The Pathway to the Claw quest.).

San's Shop of Occult Items it is probably the most interesting "optional" place Scarlett can visit in the Inner City. Not only does she sell a variety of useful and powerful magical items, and not only can she offer work (Quests), but San can also magically combine the gemstones from any Ring of Loyalty (such as Scarlett will have found on the Mistress of Assassins) with Scarlett's Moonblade to improve the weapon.

The Guard Captain of the Inner City can offer Scarlett work (Quests). During the Persian Occupation, the out-of-work captain can be found at the Tavern, but even then he still has the best interest of the city and its citizens at heart. After the occupation ends, he can be found back in the Garrison.

Ulrik, a former blacksmith, now offers training in combat Physical Skills in front of the Old Cathedral. He might also be induced to sell his old Smithy to Mattheo, helping Scarlett with the An Adequate Smithy quest.

Right outside of the Garrison appears to be a small market area, where Madame Dunequerque has a small shop offering exotic weapons for "adventurers" and a unnamed Herb Merchant deals in herbs with healing power. Across the bridge, in front of the Tavern, a Fruit Merchant sells some healthy food items. 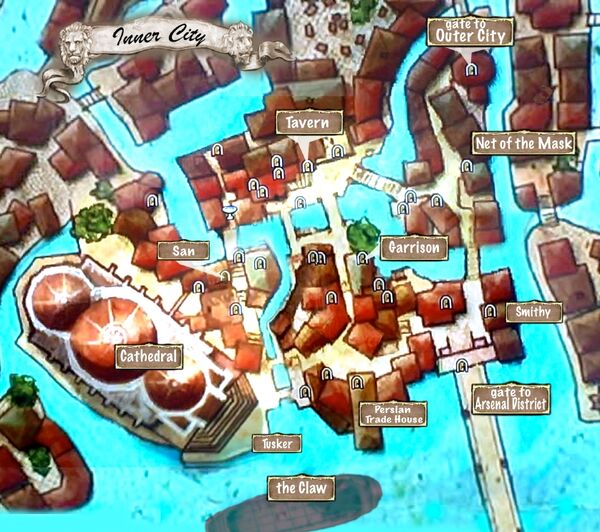 Just beyond the gate to the Outer City, where Scarlett first enters the Inner City, she will find a small plaza before the Guildhall of the Net of the Mask, the only guild to make its home in the Inner City. A sign out front proclaims that contrary to rumors, Magic is not taught at the guild hall, which, of course, is a lie. Once Scarlett has opened the gate from the Outer City, Aeris will move to this guildhall, and be willing to teach Scarlett new necromantic Mental Skills.

If Scarlett joined the Net of the Mask guild, the entire guildhall will be open to her, she can train there as well as take a rest.

The Old Cathedral it is the largest building that dominates the Inner City area. Sadly, it has fallen into decay and disuse. What used to be the front entrance is now blocked by debris.

In fact, Scarlett will have to eventually find her way into the old cathedral via the Catacombs beneath the Inner City. She may wish to find it sooner than absolutely necessary, because it contains a Gateway Idol.

There is a small plaza in front of the Persian Trade Center. During the Persian Occupation, the trade center building itself is closed to Scarlett. Which is unfortunate, because it's probably the best route onto The Claw. She needs to find someone who can get her inside…

After the occupation ends, Scarlett will find both Turek, a trader, and Abd el Malik, a teacher of advanced combat Physical Skills, inside.

There's a lot happening in The Tavern. As mentioned, the Guard Captain of the Inner City can be found here during the Persian occupation, offering work (Quests). Another citizen will ask Scarlett to deliver a letter to a blonde woman in the Skullbreak Tavern of the Arsenal District, A Note for A Lady that will intorduce Scarlett to Liora. After the Persian occupation, Scarlett can meet Callisto in the Tavern, starting the Heir to the Mansion quest.

The innkeeper, Jose, appears to be a jovial twin of the innkeeper back at the Windmill Tavern, and he is just as duplicitous. If Scarlett speaks to the innkeeper during the Persian occupation and foolishly admits she's from the Mountains, he will lead her into a trap. Once she escapes, she can earn the Apple Wine Achievement (trophy) by killing him.

Lastly, the Tavern's stairs lead up onto the Inner City Rooftops, where Scarlett can find even more adventure.

Hector's flagship, the large rowing galley called The Claw, will be anchored in the canal, in front of the Persian Trade Center and the Old Cathedral. Scarlett has been told that Sophistos has been taken prisoner aboard The Claw, and she will want to get aboard herself. However, that will prove easier said than done. (More information on The Claw…) 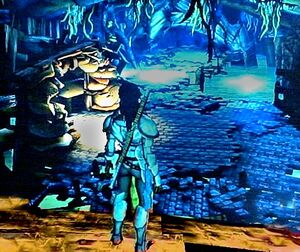 The Catacombs are a maze of tunnels, sewers, and old construction that sank beneath the rising sea, hidden below the Inner City. Just about anything can be found there, and anyone venturing there is well advised to bring a lantern and a weapon.

There's really only one way into the Inner City Catacombs, by swimming into the canal and finding the sewer access at the canal in front of the Tavern. (Click on map to enlarge.) 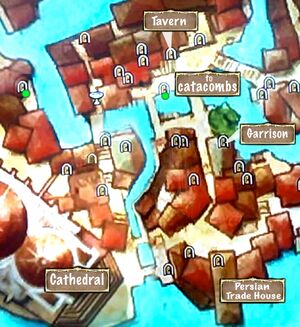 There are two other ways to exit the catacombs, however: a ladder leads up through a sewer grate to an isolated landing. This is only used for the Dubious Methods quest, and it's not possible to go anywhere else in the inner city from that landing.

In addition, the catacombs have a tunnel that leads into the Old Cathedral basement. After making her way up to what's left of the ground floor, Scarlett can use her warhammer to clear debris from the Cathedral's front door and exit into the Inner City through it. But, it's still not possible to enter the Old Cathedral through that door, even after the debris has been cleared. This is only an exit.

The mixture of sewers, tunnels, and old ruins is populated by many Grippers, some stray Assassins, a flock of Flying Beasts who must have gotten really lost looking for the rooftops. and a few other surprises. (Click on map to enlarge.) 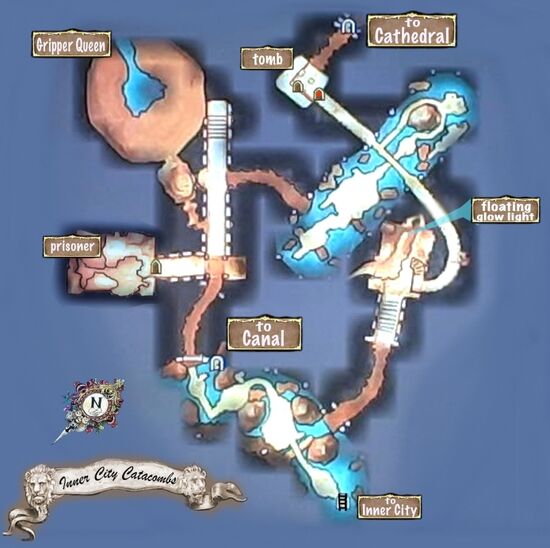 The Inner City Catacombs are literally crawling with Grippers, especially in the hallways approaching the Queen's nest. Also in that hallway, Scarlett will spot a laconic Guardsman standing watch in front of a locked gate that's serving as a jail for a single prisoner (he's Gio, see Tusker's Special Friend.)

At the end of one of the catacombs passages, Scarlett will find a ladder climbing up into a well. This leads to an isolated landing that gives access to one home, but not the rest of the city. It's needed if Scarlett has accepted the Dubious Methods quest from the Hooded Wings guild. There's also a Pale Hearts statue on the wall here, which will activate if Scarlett is high enough level.

The catacombs also provide the only way into the Old Cathedral, which Scarlett will want to visit at least once. On her first trip there, she will need to knockdown a blocked door with her warhammer and deal with the trio of Lectors in the small room behind it. That room also has a locked gate requiring a special key to enter a tomb. The key will only be available to Scarlett if she has accepted the The Sword of St. Anthony quest as a member of the Order of the Holy Seal guild.

These Quests are fulfilled primarily by actions in the catacombs: 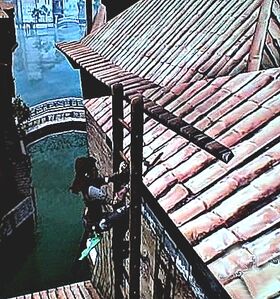 When honest citizens walk the streets of Venice, they may glance at the colorful wares offered by street vendors, search friends, or perhaps search dark shadows and alleyways warily for a cutpurse. But except when confronted by an architectural masterpiece, they seldom look up above them. And even if they did, the roofs hide themselves. That makes them attractive for rogues and others who prefer to travel out of sight of the masses.

There are two rooftop areas in the Inner City that Scarlett can visit, two distinct and separate collections of interconnected roofs. One covers The northwestern islands, with makeshift bridges spanning streets and canals. The other covers a central clump of buildings.

There are two rooftop areas in the Inner City. Each of the two areas has its own unique access points, ways for Scarlett to get up above the streets. (These are marked with red numbered circles on the street map that follows. Click map to enlarge image,) 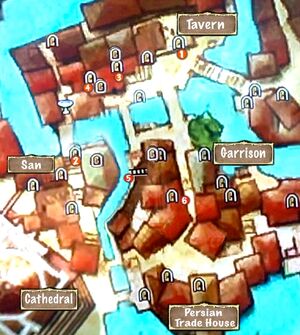 The northwestern collection of roofs have four different ways to access it. The most obvious and straightforward is through the Tavern; (1) enter the Tavern and go up the stairs to the balcony, and go inside and continue up. A door exits to and external balcony which runs around the building counterclockwise. (When Scarlett reaches the eastern part of the balcony, she will see a pair of Rogues discussing a missing associate, Balthazar. Balthazar himself will show up just a few roofs away.

There are three other entrances to the northwestern rooftop area, each using a private home. Enter one of those houses (2) (3) (4) and go upstairs, find a window, and go outside onto the roof beyond the window. (Windows work just like doors, and on the official map even look like doors.)

There are only two ways to access the south-central rooftop area. A long ladder climbs from a makeshift wooden boardwalk along the canal (5) up onto the roof. Alternatively, Scarlett can enter a private home (6) that leads to a window not very far from the ladder.

Of the two rooftop areas, the northwestern is by far the most interesting. Among other things, it is where Tusker has his rooftop hideout. Scarlett must visit the rogue there after she meets him in front of the Old Cathedral down on the streets as part of mandatory The Pathway to the Claw quest. 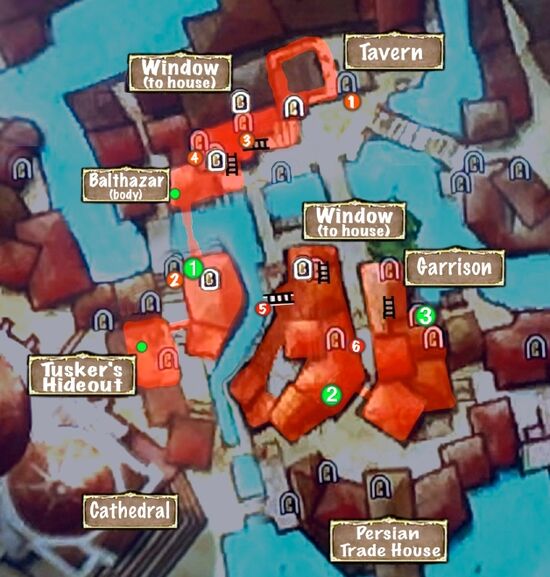 If Scarlett reaches the rooftop through the Tavern, in addition to the two Rogues waiting on the landing, she will eventually encounter Balthazar's body lying on the roof, which will trigger two useful encounters, one with her first Living Statue, and then another meeting with Nox which will initiate the Lost Knowledge quest. There is also a nest of Flying Beasts on one of the roofs here, marked with a green numbered circle (1) on the map. (While it's possible to avoid these encounters by reaching Tusker's hideout through the house (2) window, it's not as much fun.)

By comparison, the south-central rooftop area is boring. There are two nests of Flying Beasts there (marked (2) and (3)on the map) if Scarlett has undertaken the Clear Sky in the Inner City quest. There are also to treasure chests and a couple of dead Skeletons lying about. Once Scarlett has mastered The Whisper necromantic skill, she can use The Passage to speak with the ghosts of these Skeletons.)

These Quests are significantly advanced by actions on the Inner City Rooftops:

Retrieved from "https://venetica.fandom.com/wiki/Inner_City?oldid=7829"
Community content is available under CC-BY-SA unless otherwise noted.