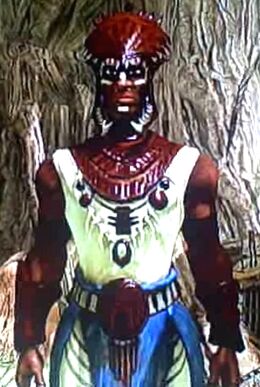 Juma Warriors are Princess Chiamaka's guards and shock troops. They come from the Juma Tribal Lands to the Arsenal District when Victor convinces the Doge to cede authority to the Princess to hunt for the mysterious stranger who threatens their plans (Scarlett) by supplanting the normal city Guardsmen there.

Juma Warriors use a spear and shield in combat. The spear has a long reach, allowing multiple warriors to converge on Scarlett, and it is also a fast weapon, allowing quick, multiple attacks; they are especially dangerous in groups. The shield makes it harder to penetrate their defense.

Killing a hostile Juma Warriors will add 120 points for Scarlett's Experience. Scarlett can also elect to compete with Juma Warriors of various skill levels and numbers in the (non-lethal) tournament in the Necropolis of the Juma Tribal Lands, once Scarlett has resolved her differences with the Princess in the Necropolis (see the Let the Games Begin! quest.)

The honor guard accompanying Princess Chiamaka herself usually contains one or more Elite Juma Warriors. These are superior fighters to the other tribal warriors.

none. There are no quests specifically dealing with the Juma Warriors. However, they will be found patrolling the streets of the Arsenal District, searching for Scarlett, and be guards around the village and sacred caves of the Juma Tribal Lands.

Retrieved from "https://venetica.fandom.com/wiki/Juma_Warriors?oldid=5533"
Community content is available under CC-BY-SA unless otherwise noted.