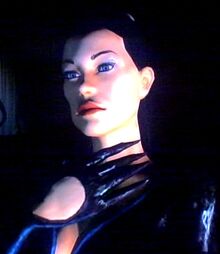 The Mistress of Assassins heads a secret order of assassins based in Venice. The Mistress was recruited to become one of the Undead Five made immortal by the dark, forbidden magics of the Undead Archon, whose cause she, and her assassins, now serve.

The Mistress has sent her assassins to search the mountains, including the small village of San Pasquale, searching for the lone mortal who can thwart her and her allies' plans for immortality, though she is unaware that this special person is Scarlett.

The Mistress and her assassins make their lair in Venice's Water Gateway.

Coincidentally (or by mysterious design) this Water Gateway will be the path Scarlett will use to enter Venice, making The Mistress the first of the Undead Five Scarlett will encounter. (She's never referred to by any name other than "the Mistress".)

The Mistress wears the Ring of Loyalty, with a magical red gemstone that can be used later to improve Scarlett's Moonblade, once Scarlett reaches the Inner City and can visit San's shop.

Retrieved from "https://venetica.fandom.com/wiki/Mistress_of_Assassins?oldid=8013"
Community content is available under CC-BY-SA unless otherwise noted.