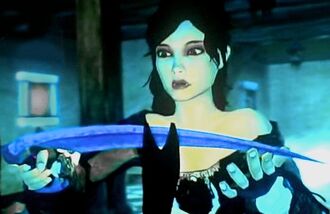 The Moonblade is a weapon of legend, forged from Moonstone and Necromancy.

The Moonblade is a deadly magical blade curved in the shape of a scythe. In the hands of Scarlett, the Daughter of Death, it becomes the only weapon that can kill the Undead Five. (It's also the only weapon that can permanently kill demons from the netherworld, such as Lectors). Scarlett will need this weapon to fulfill her destiny. Additionally, using the Moonblade in combat restores Scarlett's Twilight Energy. No other can wield its power.

The late blacksmith Tarka Gor forged the Moonblade and hid it away in his forest hut in San Pasquale, anticipating the day when Death's heir would have need of it. The blacksmith Mattheo can renew the Moonblade to its original power.

Aside from some important special skills (which must be learned with Skill Points from an appropriate trainer), the moonlight is a fast, competent blade for close combat, but is not exceptional. There are many weapons Scarlett can choose to wield which can do more damage, or which are more appropriate against certain other weapons, armor or creatures.

In some respects, the Moonblade is considered a sword for purposes of comparing to armor or what other weapons that can block or parry. However, in terms of proficiency with Physical Skills, the Moonblade is its own category, requiring separate Moonblade Mastery and Moonblade Block skill training. When Scarlett uses the Moonblade, she can invoke other, uniquely lethal capabilities by channeling her necromantic Mental Energy:

Scarlett draws her enemy into a rift between the worlds and slows them down for a few seconds.

Scarlett stabs and pierces the enemy with the Moonblade, injecting them with a poison causing gradual damage over 10 seconds. (Put this on the quickbar and use it instead of the usual "attack" action button; remember the damage takes time to take full effect, so be prepared to keep fighting.)

Scarlett uses the power of the Moonblade to create an explosion that hits nearby enemies for massive damage.

The power of the Moonblade can be augmented by incorporating magical gemstones into its design. Three times, Scarlett will acquire a magic gemstone set in a Ring of Loyalty from one of the first three of the Undead Five as she defeats them. San, who trades in magical goods in the Inner City, can then upgrade the Moonblade for Scarlett.

Only the Moonblade can kill Lectors, be used against the Undead Five, or recharge Scarlett's Twilight Energy.