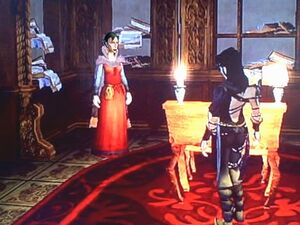 The Net of the Mask is officially an order of scholars, but are secretly studying necromancy. They publicly deny rumors of pursuing the forbidden dark arts. They espouse a hunt for knowledge (though they sound kind of angry, too.)

Although the Net of the Mask Headquarters is in the Inner City (initially closed), Scarlett can discuss joining the Net with Aeris at the Outer City courtyard by the gate to the Inner City.

Once the Inner City becomes accessible, Aeris will move to the guild's headquarters. Inside, she'll offer training in Mental Skills at the Mask's headquarters regardless of which Guild Scarlett chooses to join. Aeris is the guild representative Scarlett will deal with for quests or training. The necromancer woman is easily upset, and quite creative in inventing impractical torture for those who wronged her.

There is a Nexus Portal in the guild house foyer. Using it to enter the guildhall is an initial test of skill. In fact, unless Scarlett joins the Net of the Mask, she will not be able to use this particular Nexus portal. 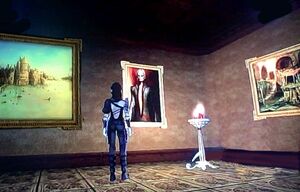 Once inside, Scarlett may notice a painting of Victor on the hallway wall. Indeed, back when Victor was still mortal, he was a prominent member of the guild. The quests Aeris will assign Scarlett all deal with uncovering Victor's past.

Only if you join the Net of the Mask, you will be able to access the hidden Gateway Idol and receive the Ring of the Ghosts.

A rather curious artifact is the bed in which a captured Necromancer is being held. It is said that it has a "mysterious connection to the Twilight World" -- in fact, if you rest in that bed next to the Necromancer (creepy thought), not only will your health and mental energy restore to full, but also your Twilight Energy.

There's no task Scarlett will need to complete in order to become a member of the Net (unlike the other guilds.) Scarlett can get a badge from Aeris by simply agreeing to join. (Scarlett's first test, once she earns access to the Inner City, will be to find the secret way inside the guild hall by using The Passage, an effective way to keep out the mundanes.)

After joining the Net of the Mask, Scarlett will receive her first guild quest from Aeris:

After completing her first assignment, Scarlett may choose to request other jobs from Aeris, either to increase her Experience or Reputation:

Regardless of which Guild Scarlett joins, the Net of the Mask will be involved in the following quest:

Regardless of which Guild Scarlett joins, her guild will always be involved in the following quests:

Retrieved from "https://venetica.fandom.com/wiki/Net_of_the_Mask?oldid=7389"
Community content is available under CC-BY-SA unless otherwise noted.