Throughout the game, Scarlett will encounter many Objects of Interest that she can pick up or use. Very generally, these objects fall into any of these categories: 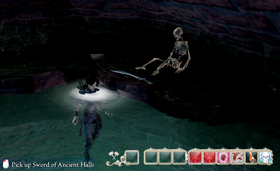 Combat is a key element of the game, and various weapons (the Moonblade, swords, hammers and axes, spear & shield) give Scarlett her offensive and defensive capabilities. Each weapon has its own unique strengths and weaknesses, and studying them can give Scarlett an edge over her opponents.

More often than not, Scarlett will obtain weapons from vanquished enemies. Some weapons can be purchased, and if Scarlett has the necessary ducats she can give her ability to inflict damage a considerable boost -- although powerful weapons also come with a hefty price tag. Some other weapons are given as a reward (e.g., the first Dervish sword from Brawler, or the Spear of the Screaming Souls, won in a tournament). Some notable weapons (The Harvester, the Hammer of Truth) are found as part of a buried treasure. 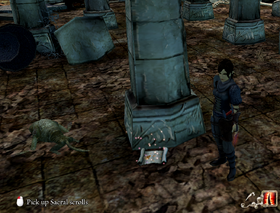 Many Quests involve specific items. Among the first such items that Scarlett encounters are probably the clothes of Mattheo's daughter that Scarlett needs to replace her tattered gown with. The Moonblade itself begins as two quest items, which Mattheo needs to fashion a working weapon. Keys play an important role as they open important locations, such as the Inner City, the Arsenal District Chimney and Catacombs, parts of houses, or treasure chests. In addition, Scarlett can offer her services to deliver parcels, medicine, or letters. Some quest items can also be magical items, such as magical rings. Among the more mysterious items are fragments of stone gargoyles that have sprung to life, or even an old skull. 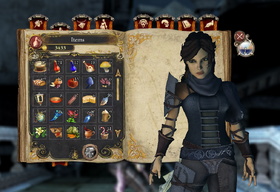 Consumables are found in many places: They can be purchased from merchants, found in houses or simply along the way. Most of them restore part of Scarlett's health when consumed. Early in the game, Scarlett can collect mushrooms at Ivy Creek; she'll also find bread throughout the game. Some plants (Grave Blossom, Stone Lilly) have stronger healing powers, and some (White Ivy, Dusk Whin) can even made into Potions with the Alchemy skill.

Once in possession of certain magical items (Ring of Life, Imperial Sword of Blood) or necromantic powers (Blood Toll, Blood Vortex), consumables become less important. If Scarlett does not sell these items, her Inventory may well look like a well-stocked grocery store, complete with fruit & veggies, meat, fish, bakery products, and even some medical supplies. 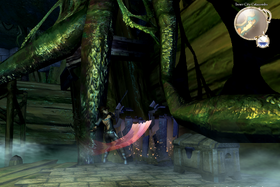 Many items could be considered valuables, but they have no function in the game except that they can be sold for ducats. Examples include jewelry, gold items, antiques (antique fresco, urn), or ancient coins. Scarlett will find these items in treasure chests, in vases that must be smashed, or on the bodies of vanquished enemies. By selling them, Scarlett can get some pocket money that allows her to buy more important items, such as stronger weapons or magical items. Cash can also be useful for a bribe here and there.

Apart from Treasure Maps, these include the Shovel, the Lantern and its fuel, the Flask of Faith, and the Alchemist Phial.

Retrieved from "https://venetica.fandom.com/wiki/Objects_of_Interest?oldid=7676"
Community content is available under CC-BY-SA unless otherwise noted.