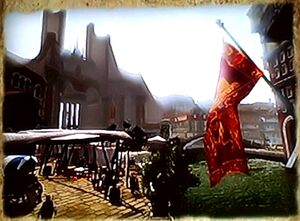 The Outer City of Venice is our girl's first exposure to the bright lights of the big city. By daylight, it's a big, beautiful, busy place, full of many people. At night, the streets can be dangerous, as roaming Rogues may accost innocent citizens. Will Scarlett be distracted from her purpose by all the bright lights and noisy people?

Nox will prove to be Scarlett's most important contact in Venice. If she asks about magical books, people will inevitably point to him and his home in the Backstreets. Not only does he know Sophistos and have some information about the Black Grimoire, but he is also a necromancer who can teach Scarlett important Mental Skills. But first, Scarlett will have to earn his trust by joining one of the city's three Guilds. (See Trust to Be Earned quest.)

Old Kronos is the last remaining member of the Nightwatch, which means he holds the key to letting Scarlett pass into the Inner City. (See Nightwatch Troubles quest.)

Rico is the first person Scarlett will meet when she arrives at the Outer City from the Water Gateway. If Scarlett asked the right question, he will point her to Nox as someone who is known for his books.Scarlett will also soon meet a helpful guardsmen who will also offer useful information to orient her in the big city.

Rat is a rogue and cutthroat keeping watch in the back streets, coincidentally right by Nox's house. He can provide Scarlett with some useful information. He can also begin a chain of dubious, optional quests that will lead Scarlett into the disreputable world of the city's rogues, including Crowe.

Master Deimos is head of the Hooded Wings guild, and can be found in the guild's hall, beside the garden in the southern part of the Outer City. He also sells potions there.

Rangar is head of the Order of the Holy Seal guild, and can be found in the guild's hall, just east of the bridge from the South Shore. Scarlett will probably have a letter to deliver to him, anyway (see the A Letter to Venice quest.) She can discuss joining the order with him then.

A simple Gardener in the southern area of the Outer City will ask Scarlett for help with his pest control problem. (See the Gardener's Nightmare quest.)

The Judge at the courthouse can be a source of optional quests, if Scarlett is looking for work.

The Guard Captain of the Outer City can also offer Scarlett a job (quest) if she wants.

Scarlett will have to claim to be a trader to pass the guards, and offer a "sample" of her wares. If she still has a Copper Nugget from San Pasquale, that will do. Otherwise, she can pick some Stone Lilly from the steps leading down to the canals at any gondola station or alternatively Dusk Whin from the Catacombs, and claim to be an herb trader. Alternatively, Scarlett can sneak in by swimming across the canal to a hidden gondola dock in the northern trading Center. She can "see" this dock by invoking the Raven's Eye from any of the three bridges.

Once inside the trade center area, Scarlett might meet Madeline, who's having problem with a drunk; or the Guard Captain of the Outer City, who might have work to offer; or she might stop by the jail atop the Garrison to help out a prisoner in need of a better lawyer; or she might visit Crowe's Nest for some less honest pursuits. From here, she can also look to enter the Amphitheater.

From the catwalk atop the towers, the view of the city is spectacular! After Scarlett's finished with a hard day of questing and self-defense, she might find a comfortable bed at the Hostel, or maybe catch a quick nap at the Garrison.

Within the Trading Center, the Amphitheater is an even more exclusive area for well-known traders only.

Scarlett will need to get another merchant to vouch for her to be admitted (see the Access to the Amphitheater quest.)

Once inside, Scarlett might find delivery work from one of the merchants there, if her Reputation precedes her.

The Marketplace is a busy, cluttered area of outdoor vendor stalls. Many things can be bought here during the daytime hours:

Joanne buys and sells goods for hunters. She's the person to see to cash in any leather or hides. She can also alter leather armor to fit, if Scarlett didn't get Mattheo to armor her back home. Also, she can teach the Beast Knowledge skill, useful for skinning Delvers and harvesting beacons from Grippers, if Scarlett didn't learn it from Brawler back home.

Inar sells all manner of fresh fruit, which is not just tasty, but it's good for you!

Rufus looks to be an art dealer, but actually sells lanterns and oil, just the thing before heading into the catacombs (if Scarlett didn't get a lamp from Hengfisk.)

Madame Orlof is the baker, selling fresh bread, and also some sweets (just the thing for bribing a street urchin.)

Pollux sells maps at the western end of the marketplace. He isn't at his stall early on (a sign says he's on vacation), but he appears ready to sell treasure maps later in the game, if Scarlett revisits the Outer City marketplace.

The Minstrel at the fountain recites a rhyme every time 5 ducats are put into his basket. If Scarlett hears all rhymes, she earns about 200 XP.

The Backstreets district, with its narrow streets and alleyways, is the roughest district of the Outer City. The area has a appearance of new construction, with wooden platforms substituting for cobblestone streets in several places.

The guild house for the Order of the Holy Seal guild is at the far western edge of the backstreets.

The Nexus Portal found at the western entrance to the backstreets leads to a small room with small treasure.

The Old Temple area southwest of the Outer City, is dominated by the old domed building that lends it its name.

The guild house for the Hooded Wings is located beyond the garden behind the old Temple.

The courtyard before the gate to the Inner City, in the northeastern part of the Outer City, is surprisingly safe, given its proximity to the backstreets. Aeris can be found here, until the gate is opened. Often, Kronos, the last of the Nightwatch, can be found here as well, since it's the location of that guild's hall. 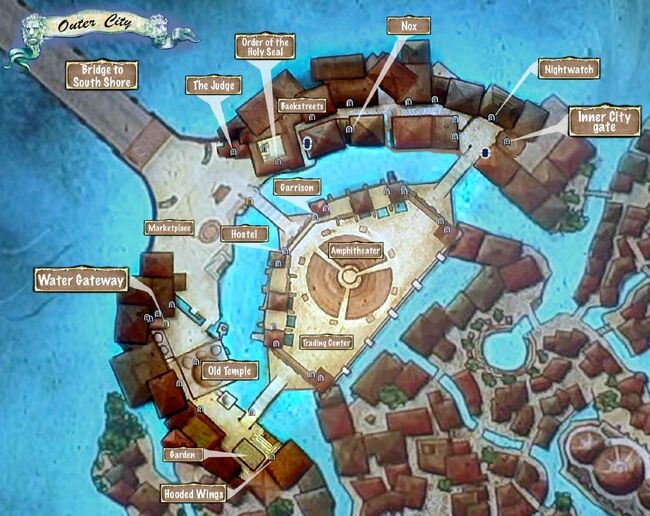 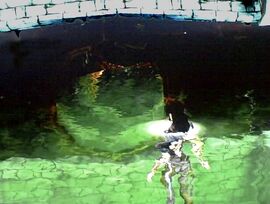 The Catacombs are a maze of tunnels, sewers, and old construction that sank beneath the rising sea, hidden below the Outer City. There are five locations where one may enter or exit the catacombs: 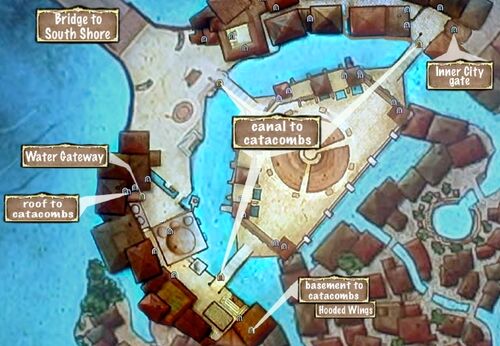 Scarlett will definitely want to bring a lantern. She will probably encounter enough Grippers below to keep it full of oil. (Assuming she has Beast Knowledge to harvest the grippers' beacons.)

The mixture of sewers, tunnels, and old ruins is populated by a few Delvers, many Grippers, some left-over Assassins, and a few stray, non-hostile Guardsmen. 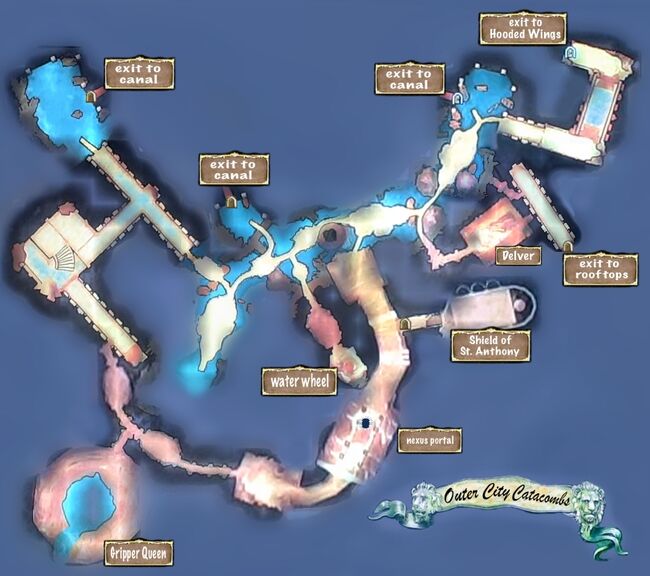 There are a few Quests that will take Scarlett down into the outer city catacombs (though they all begin with a request up in the city): 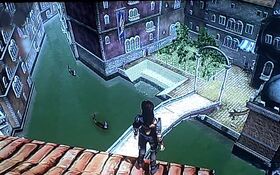 When honest citizens walk the streets of Venice, they may glance at the colorful wares offered by street vendors, search friends, or perhaps search dark shadows and alleyways warily for a cutpurse. But except when confronted by an architectural masterpiece, they seldom look up above them. And even if they did, the roofs hide themselves. That makes them attractive for rogues and others who prefer to travel out of sight of the masses.

To get onto the roofs of the Outer City, Scarlett will usually use a ladder; sometimes the ladder extends all the way to the streets, but sometimes it's necessary to first get to a balcony by entering passing through someone's residence. (Street-level doors to these residences are marked by red dots on the map.) 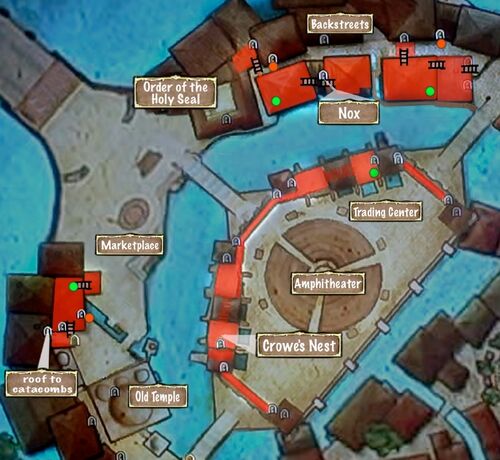 The Old Temple area of the Outer City has only one accessible rooftop: to get there, Scarlett must first reach a balcony. The easiest way is to enter a private home just north of the Water Gateway exit; climb two flights of stairs, cross the room to another set of stairs and continue climbing to a loft which finally has a door that opens to the balcony with a ladder to get onto the roof. (A second door to that balcony actually leads down to the Catacombs, a route favored by the Hooded Wings. See the map of the Catacombs (above) to see how to reach that door from below.) The only thing on this rooftop is a nest of Flying Beasts (marked by a green dot on the map) and a view of the Marketplace and Old Temple.

The Backstreets have several accessible rooftops. There are two ladders climbing from the platform in front of Nox's home. On the roof to the west there is a nest of Flying Beasts, plus an arch across the street leads to a ladder to a balcony, with a door into a private home that can lead down to the street (or vice versa.)

The ladder right beside Nox's home leads up to yet another rooftop. Although some Flying Beasts flutter above this roof, there's no nest here. The easternmost rooftop on the Backstreets it is most easily accessed by a ladder at the far end of the backstreet's area. From that roof, another ladder climbs further to a higher roof where the Flying Beasts make their nest. Another ladder to the North drops down onto a private balcony and a doorway into a private home that can exit to the streets (and vice versa.)

Technically, the catwalks of the Trading Center aren't really rooftops, though Scarlett can wander onto a few tower roofs from them. The uppermost area can be reached by climbing either through the Garrison or hostel towers. The roofs here are connected by catwalks and covert archways. A nest of Flying Beasts can be found at the northernmost tower. Crowe makes his home atop the south tower. The towers of the Trading Center offer spectacular aerial views of the Outer City.

Flying Beasts fly lazily above many of the roofs, and make their nests in for chimneys in the Outer City. If Scarlett joins the Hooded Wings, she will be asked to meet a courier on one balcony. The rogue Crowe makes his home by the southern tower. A lone guard protects a chest above the trading center. Other than that, Scarlett won't meet many people up here.

Retrieved from "https://venetica.fandom.com/wiki/Outer_City?oldid=7823"
Community content is available under CC-BY-SA unless otherwise noted.