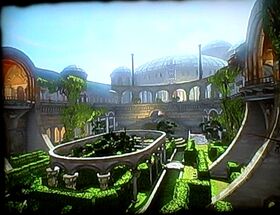 About the Palace Edit

The Doge's Palace is the seat of power in Venice, and the residence of the Doge, its ruler. Many of the wealthier nobles maintain apartments on the palace grounds surrounding its luxurious gardens. The palace is also Scarlett's final stop on her quest, as the Undead Archon himself currently resides in its throne room.

To get into the Palace, Scarlett we'll need to be wearing the Nethercoat, a special garment created by her mother, Jarta, from the Dusk of the Dead obtained from Princess Chiamaka, as part of The Doge's Palace quest. She will need to be wearing the Nethercoat to get past the Guardsmen at the palace gate. (Apparently, if she is wearing it, they will assume she's a member of the Portuguese delegation, perhaps because it confounds Victor's magic.) Once inside, she can choose any armor she finds appropriate.

The Palace contains a lower, ground-level interior containing the entrance hall, government offices and Courtiers's apartments; a large central Garden; an Upper Level of Courtiers's residences; a Dungeon for those unfortunate enough to attract the ire of the Doge; and finally, the Throne Room itself. Initially, Scarlett will only have access to the ground level of the Palace. In order to gain access to the upper-level, garden, and dungeon, she will first have to convince the Steward that she is trustworthy, part of the Steward's Trust quest. To gain access to the Throne Room, Scarlett will have to work to raise the City Council, Palace Guard, and rebels into open rebellion, part of the Glory Forsaken quest. 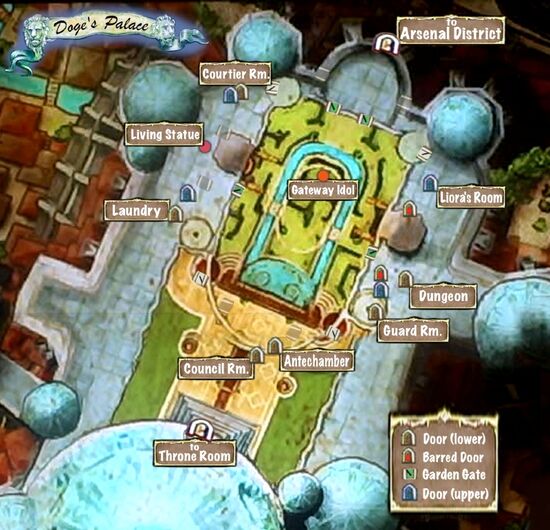 The ground level of the palace consists of the entry hallway (which leads out into the upper levels of the Arsenal District) and a wide corridor that inscribes a large, rectangular loop around the Garden area. Doors to individual offices and apartments line the outside of the corridor.

There are two barred doors which Scarlett can only pass by breaking them down with her war hammer or battle ax. (As usual, no one will comment if she chooses to smash in those doors.) In the section of corridor between those doors, she will find several of the Doge's new "allies": Necromancers and Lectors. Also in that section of corridor, Scarlett will find the locked door to the Palace Dungeon, but she will also need a special key to past there.

Aside from the doors to the other areas, the main places of interest in this lower-level are the City Council Chambers and the Guard Room where the captain, Lucio, can be found.

Once Scarlett have earned the Steward's Trust, she will be able to enter the Palace Gardens through any of the four gates, or by descending the southern ramp from the upper level. The garden is a maze of hedges. If Scarlett explores it, she will find a Gateway Idol, but the statue fragments aren't there! (She will need to visit Liora's apartment on the upper level to get the fragments.)

Scarlett will also need to go digging for a quest item once she gets the Lost Love quest from the Dead Jailor's ghost in the Palace Dungeon.

Once Scarlett has earned the Steward's Trust, she will be able to access the four circular stairways that lead to the upper level of the Palace grounds. This level has the same wide corridor encircling the gardens, except here one side of the corridor is an open balcony overlooking the garden. The upper level contains luxurious apartments for the noble Courtiers, one of whom is Liora.

The upper level also leads to a spacious outdoor patio to the south which gives access to the door to the Throne Room. In order to get past the Throne Room door, Scarlett will have to win over the palace guard and the City Council to her rebellion through the Glory Forsaken quest.

The Doge and Victor both reside in the Palace Throne Room. Getting into the Throne Room to confront them is Scarlett's objective incoming to the palace.

The Steward is the man to see to enter the palace, and Scarlett will have to earn the Steward's Trust to get into the inner parts of the palace. The Steward can usually be found in the entry foyer or in the corridor just west of there.

The City Council presides in the City Council Chambers in the ground level of the Palace. Scarlett will need to see them a couple of times as part of her quests.

The captain of the palace guards, Lucio, can be found in the Guard Room. Scarlett will need to see him to earn the Steward's Trust, and he can also offer her work or sell her weapons as a Trader.

Liora lives in an apartment on the upper level of the Palace grounds. Scarlett previously met her in the Skullbreak Tavern in the Arsenal District. She can be helpful to Scarlett now.

The dungeon of the Doge's Palace is a dark, depressing construct of brick and cobwebs, infested by numerous Raging Ghosts.

To gain access to the dungeon, Scarlett will have to complete the Steward's Trust quest and smash down one of the barred doors in the Palace's ground level corridor, and deal with the Necromancers and Lectors hanging around outside the door. A dimly-lit corridor curves down from the entrance way. 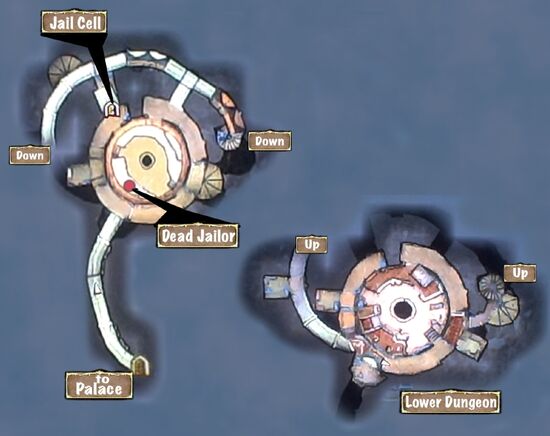 The upper level of the dungeon is a semi-circular corridor which gradually changes elevation. In addition to the Raging Ghosts, the prison cell containing the Rebels is along the outer part of this corridor. A large, circular room in the center of this area contains more Raging Ghosts, and the Skeleton of the Dead Jailor (who can provide the key to the rebel's cell.)

There are two ways to descend to the second, lower level of the dungeon. A long, dark, curving corridor makes its way down, as does a narrow, dark, spiral stairway. A lantern is a must to travel this way.

The lower level of the dungeon, much darker than the upper level, is another circular corridor surrounding a large, central circular room. Aside from the Raging Ghosts and some minor treasure, there really isn't any reason for Scarlett to explore down here.

Retrieved from "https://venetica.fandom.com/wiki/Palace?oldid=7539"
Community content is available under CC-BY-SA unless otherwise noted.