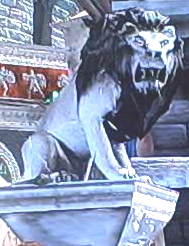 Lurking about Venice, amid the statues and gargoyles, there are a few, special creatures of living stone. Scarlett's life energy and strong connection to the Twilight World sometimes brings them to life (whereupon, they attack her, naturally.) When they are killed, they shatter, leaving behind one enchanted stone fragment in particular, called a Pale Heart (also called a "gargoyle stone".) 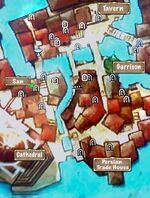 San, shopkeeper in the Inner City, will describe these to Scarlett when Scarlett first visits her magic shop. San wants to collect a total of eight Pale Hearts to "make something special", thus establishing this quest. San is good to her word, and the reward makes the effort worthwhile.

Depending on how Scarlett explores the Inner City, she may encounter her first pale heart living statue on the rooftops when she finds Balthazar's body and one spontaneously comes to life and attacks her. After that, Nox will appear and explain what they are; however, he is not the source of the quest.

Scarlett needs 8 Pale Hearts (aka "Gargoyle Stones") altogether; there are 9 in Venice. Scarlett will encounter some while following her other quests; a few will have to be tracked down specifically. The stone beasts may not come to life the first time Scarlett approaches them. She needs to have accumulated considerable Experience until her necromantic energy is so great they respond to her presence. (The Level or Twilight Energy she needs seems to vary from statue to statue.) She may pass some of these locations several times early in the story without triggering an attack, and will have to return later to collect it.

A spear and shield works well on the Stone Birds. Just get right on top of them and keep hitting as fast as you can. The bird usually cannot get a blow in IF you are close enough and don't pause. (The spear and shield do very VERY little damage to the Stone Bird. Best to use blunt. He'll stay away for the first two swings but the final slam will do about half the damage.)

Here are the locations of the Pale Hearts:

If Scarlett continues exploring even after she has collected the first eight, she can acquire the ninth Pale Heart; she earns Experience for defeating the gargoyle, but the quest is complete as soon as she delivers eight to San.

The living gargoyles have the least damage reduction against hammers and axes. Depending on Scarlett's damage rating, other weapons might do little or no damage. Because hammers and axes are slow, they are tricky to time against the Stone Birds, and necromancy might be a safer solution.

The stone beasts may not come to life the first time Scarlett approaches them. E.g., Scarlett can walk around the lion statue in the Outer City garden several times early in the story without triggering an attack, and will have to return later to collect it. The statue in the Castello Mansion (Eastern Villa) may or may not spring to life when Scarlett goes digging for treasure in the garden; if not, she'll need to return later to complete the quest. (Each statue seems to trigger on a specific level.) 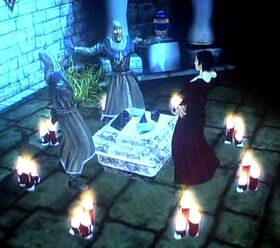 If Scarlett completes the quest and delivers eight Pale Hearts, San will indeed perform a ritual to make something nice for Scarlett: an enchanted stone that adds 10 points to her Wisdom.

Adds 1200 points to Scarlett's Experience, plus 180 points for each living statue destroyed. (No change to Reputation.)

Retrieved from "https://venetica.fandom.com/wiki/Pale_Hearts?oldid=7568"
Community content is available under CC-BY-SA unless otherwise noted.