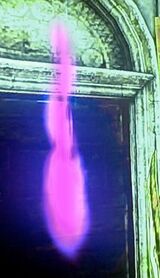 Raging Ghosts are a strange form of restless spirit projected from the Twilight World of the dead into the Mortal World of the living. To Scarlett's normal vision, these can be vaguely seen as a large, translucent, flickering violet light, resembling a giant candle flame. Despite that appearance, they can still reach into the mortal world and inflict harm on Scarlet there. She, however, cannot affect them from the mortal realm. 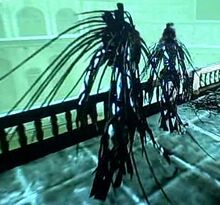 When Scarlett uses her necromantic skills to invoke The Passage, her view from the Twilight World is quite different. Here, these creatures appear as if some sort of giant prawn, with a dozen flailing feelers or tentacles. At least from the Twilight World, Scarlett can fight back. Despite these creatures connection to the dead, any weapon Scarlett wields against them in the twilight world can do them damage, and they are also vulnerable to her necromantic Mental Skills.

Defeating a Raging Ghost adds 170 points to Scarlett's Experience. Nothing of value can be found by searching the remains of a defeated Raging Ghost.

Victor will have several Raging Ghosts at his command during his final battle with Scarlett.

Retrieved from "https://venetica.fandom.com/wiki/Raging_Ghosts?oldid=5590"
Community content is available under CC-BY-SA unless otherwise noted.