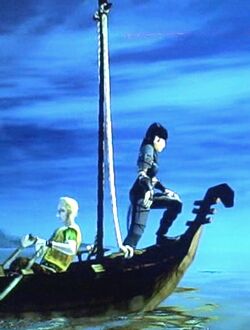 This is one of three quests Death gives to Scarlett in the first dream sequence at the start of the game.

Death told Scarlett she would need a weapon called a Moonblade and go to Venice to defeat the Undead Archon.

This quest is mandatory.

Scarlett will have to fulfill a number of other quests, especially in San Pasquale, before she can leave town and hope to complete this quest.

Scarlett must first get Proper Clothes to begin this quest. Then she must rescue A Friend in Distress and do A Favor for The Blacksmith.

Then she'll need to get the Moonblade. That means finishing The Moonblade Mystery and The Moonblade Resurrection quests. In doing those, she will find The Concealed Final Will and pick up the company of Don and Nesto on her journey.

In the gorge tunnel, Scarlett will have to use her brand-new Moonblade to deal with a pair of Lectors. Don and Nesto will deal efficiently with the locked gate for her.

At the South Shore, Scarlett will have to deal with more Assassins outside and inside and free their hostages from the Windmill Tavern. (She might want to do some training with the warrior, Yngvar, and accept some optional quests.) Finally, she must fetch paddles for The Injured Fisherman's boat so she can ash him to row her to Venice. Giving the fisherman his paddles completes Reaching Venice (even though she's still in the Southern Bay.)

Scarlett will now have her legendary Moonblade.

Add 200 points to Scarlett's Experience. No change to Reputation.

Retrieved from "https://venetica.fandom.com/wiki/Reaching_Venice?oldid=4730"
Community content is available under CC-BY-SA unless otherwise noted.