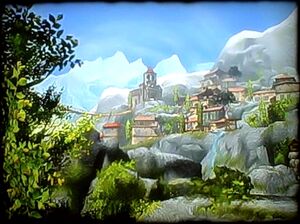 The peaceful little mountain village of San Pasquale is known mostly for its copper mine.

Events in Venice have now spread up into San Pasquale as assassins descend on the village searching for someone special, whose identity they do not know, but seek only as an outsider.

Scarlett, the heroine of Venetica's story, was brought to San Pasquale as an orphaned child, to be raised there by the kindly Jarta (who Scarlett calls, "auntie").

Benedict is, or was, Scarlett's betrothed before he was slain by assassins.

Leon is Scarlett's impulsive and reckless step-brother. Keeping Leon out of trouble will be a frequent task for Scarlett.

Mattheo is the village's blacksmith. He can help Scarlett find suitable clothing, as well as customizing armor and weapons for her.

Brawler, as his name implies, is the village's roustabout. He can give Scarlett some useful tips on fighting with weapons. He hangs out in the field in the lower village.

Lilia is a trader in the village, specializing in Copper ore from the mines. She may be able to sell Scarlett one or two items that will help her on her coming journey. During the day, she sells her wares in the village square. At night, she can be found in Mattheo's house.

Tarka Gor lived in a small, isolated hut deep in the forest. Unknown to Scarlett, he forged the Moonblade for her long ago, and hid it away until she would need it. His skeleton, and ghost, are still in the hut.

Don and Nesto are an inseparable pair of cousins visiting from Venice. They are nephews of the late Tarka Gor, bickering over their inheritance. They will prove able companions to Scarlett on her coming journey to the Venice, and even beyond.

Tinker and Kazam are two local men who have volunteered to guard the path coming into the village. They are full of witty banter and helpful advice.

The Petrono Brothers (aka "evil villagers") are a disreputable pair who blame Scarlett for the assassins' attack on the village, and plan to get even with her.

A Miner down in the copper mine might be able to direct Scarlett to some moonstone.

Rupert was the gatekeeper at the gorge tunnel. Sadly, Lectors have killed him.

San Pasquale is a peaceful little mining village high in the mountains. It has also been Scarlett's home for many years.

A small part of the village was cut off when the rope bridge across the gorge was destroyed in the assassins' attack. The surrounding forests are full of tasty mushrooms and the occasional lump of copper ore, and a few remaining assassins, perhaps. Paths from the village lead to an old forest hut, the copper mine, some old ruins, and the road to Venice. 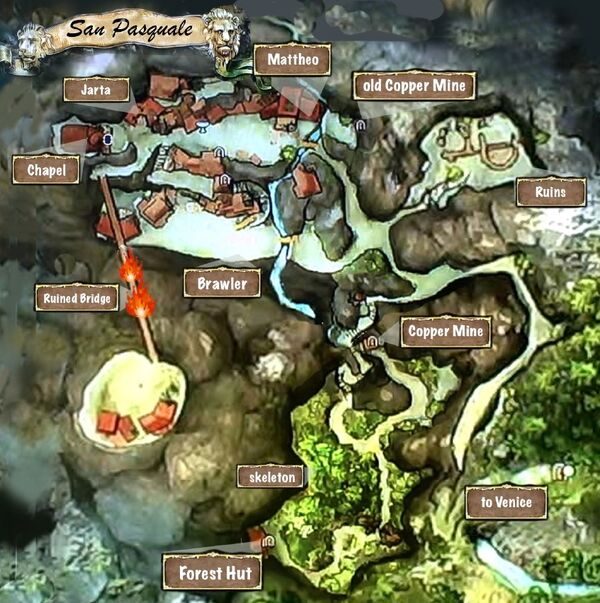 The morning after the attack, at the start of the game, Scarlett will awaken in what remains of Jarta's home, which still has a bed where Scarlett can return to rest and recover her energy, or if she just wants to visit her stepmother again.

The blacksmith, Mattheo, is at his forge on the north side of the eastern in end of the village. His home is on the south side of the same street. The merchant trader Lilia can be found on the street during daylight, and in Mattheo's house after dark.

When Scarlett is ready to learn her first combat skills, she should go see Brawler in the flat area below the main village.

The ruins of the old church have a Nexus Portal. Another Nexus Portal is located in the wall of a house above Jarta's home and can be reached via the ladders. Scarlett will have to learn The Passage in order to access them. Both Portals lead to secret rooms with some loot.

Ivy Creek is the forest region along the river that cascades down from San Pasquale. Footpaths lead from the bottom of the stairs to the copper mine entrance and to the Forest Hut.

At the bottom of the stairs that descend into Ivy Creek Scarlett will have to complete one of her early quests: to rescue Leon from two Assassins (the quest is not strictly mandatory, but running into Leon at this location will be unavoidable).

If Scarlett wanders through the woods of Ivy Creek, maybe picking mushrooms, she'll find a skeleton lying against a tree; once she has learned The Whisper, she can speak to the ghost to get the Legendary Treasure Map.

This pleasant little cottage deep in the mountains' woods once belonged to the late blacksmith, Tarka Gor, whose apprentice, Mattheo, is presently occupying the village smithy. Don and Nesto are now squabbling over the Hut as their inheritance. To find the hidden will, Scarlett will need to suss out the order to press the four plates by the fireplace. The clue to the combination is visible from the house's balcony, recorded as a pattern of discolored flagstone on the walkway.

Once Don and Nesto get Scarlett inside the locked door, she will find the Moonblade she needs, hidden away for her long-ago, not far from skeleton. If Scarlett returns after she has learned The Whisper (which she'll learn using the Gateway Idol at the Old Cathedral in the Inner City), she can speak with Tarka Gor's ghost.

The Copper Mine is a collection of tunnels in which San Pasquale's major export, copper ore is mined. The Mine is now almost empty. The workers have been killed or driven off by the assassins' attack and the influx of Delvers into the tunnels. The lone remaining old Miner hopes that, one day, new workers will return and the mines, and San Pasquale, will flourish again. 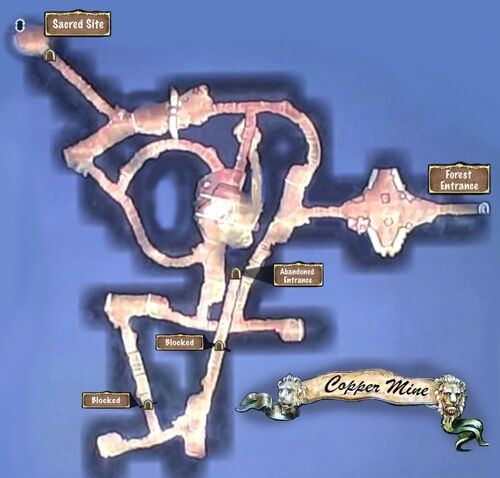 The forest entrance to the copper mine is at the end of a path, beyond Ivy Creek, southeast of the village.

There is an older, now abandoned entrance to the copper mine just west of Mattheo's smithy. To reach that entrance, Scarlett will have to climb up to the rooftops using a ladder just west of the village fountain, then clamber eastward overs the roofs (and over Mattheo's smithy) to the entrance. This abandoned entrance has been closed off from the rest of the mine, so she'll need a warhammer or battle axe to break down the door to go in that way. On Scarlett's first visit to the mine, she won't have to pass that way in order to reach her goal: the Moonstone beyond the Sacred Site.

The Sacred Site was just recently discovered by the miners, and is isolated from the rest of the mine by a crude door. Inside, Scarlett will find her first Gateway Idol. Once Scarlett has restored and used that idol, she'll be able to use The Passage to see the Nexus Portal that leads to the chamber where the Moonstone lies so she can repair her Moonblade.

Later in the game, Scarlett may eventually learn of buried treasure in the mine from the Legendary Treasure Map, if she speaks to the ghost of the skeleton in the woods north of the forest hut; and the Treasure of the Lost Corridor. Bring a Shovel.

Retrieved from "https://venetica.fandom.com/wiki/San_Pasquale?oldid=7969"
Community content is available under CC-BY-SA unless otherwise noted.