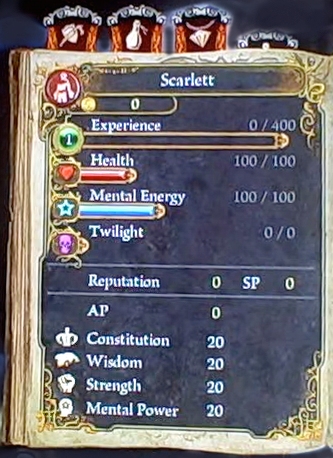 Scarlett's progress through the game is tracked on nine pages of status displays on her Inventory journal:

Scarlett's basic attributes and current status are displayed on the fourth page of her inventory journal. This includes the following:

The number of ducats Scarlett has accumulated is displayed next to the gold coin. Scarlett can use her ducats to purchase various items, such as weapons, armor, services, potions, tools, and other items.

This number only reflects her cash on hand. She may have accumulated other treasure (in gold, jewels, or other items in her Inventory), but their value is only reflected after she has sold them for ducats to a trader. (Most of Scarlett's weapons, except the Moonblade, may also be sold for ducats.)

Scarlett begins with zero experience at level one. As she accomplishes small feats in the game, she will be awarded additional experience. Her total experience determines her level. See Experience Level Details for details how experience points and experience levels are related.

Experience can be awarded for completing Quests, defeating enemies, reaching new locations, and other actions.

Each time Scarlett reaches a new level, each of her four Attributes is raised by one point and she is awarded three additional Attribute Points (AP) and 20 additional Skill Points. The Player can use those new points any time thereafter to improve Scarlett's statistics or learn new skills.

The status display bar for Experience is filled in (with green) to reflect how close Scarlett has come to reaching the next level. The numbers indicate her current experience point total / points needed to reach next level. An approximation is also indicated in green on the Heads Up Display that is always visible during gameplay.

(At the time Scarlett achieves a new level, her Health and Mental Energy are also restored to maximum.)

This screen displays both Scarlett's current / maximum health values, and graphically represents it by filling in the health bar with red. Current Health is also indicated in red on the Heads Up Display that is always visible during gameplay.

Scarlett's Current Health is reduced by successful attacks in combat (including any necromancy used by her enemies.) If Scarlett's current Health reaches zero, she dies. (Though, if she has Twilight Energy remaining, she'll be back. She is Death's daughter.)

Scarlett's Current Health will improve very slowly with time. Current Health may also be improved, up to the maximum health, by consuming some foods, herbs, or potions, or using salves, or using some rare magical items, or casting any of several vampiric necromantic spells (Mental Skills) Scarlett may have learned.

Taking a rest (requires finding a bed or comfortable chair or stool) restores her Current Health to Maximum Health. Later in the game, when the gondoliers become available, a gondola ride also fully restores Scarlett's Health.

Scarlett recovers Mental Energy with time (more quickly than her Health.) Also, there are a few herbs and potions that can restore some Mental Energy. A few rare magic items can also restore Mental Energy.

When Scarlett does things that are noticed publicly, people will remember her and talk about her deeds. Scarlett's Reputation reflects how well-known she is. Reputation is neither good nor bad, it simply reflects her renown in the city of Venice. There are some people who will only trust Scarlett if she has a sufficiently well-known Reputation.

There are a few cases where Scarlett can lose Reputation. If she is seen entering the home of a Citizen and take something (steals) from that home, she will lose Reputation. The player will be warned Scarlett has been seen when a voice greets her in the home with a phrase such as "Honest people are always welcome here," or "What are you doing in my home?" (Scarlett can make her own mind up as to whether she wants to take things from empty homes.)

Scarlett can also lose Reputation with a few other decisions, such as attacking a citizen of Venice. (Normally, it's not possible for Scarlett to attack a citizen; there are only a couple of such opportunities. Rogues, such as Rat or Tusker, are always fair game.)

Skill Points allow the player to customize Scarlett however desired, using them to choose which Skills to learn from those available.

Each time Scarlett increases her Level, she earns 20 Skill Points (SP). The player may use those Skill Points to add new Physical Skills or Mental Skills to Scarlett's abilities. To learn a new skill requires Scarlett find and visit a Trainer in the appropriate discipline (physical or mental) who can teach the Skill desired. (Plus, she needs the required prerequisites skills and have enough skill points available.) New skills cost 10 Skill Points each; or, her level of mastery may be increased for some skills which have multiple levels, also for 10 Skill Points per level.

(See Physical Skills or Mental Skills for more information on what Skills can be learned.)

Strength increases the amount of damage each of Scarlett's successful weapons attacks inflicts on her enemies.

Mental Power increases the amount of damage each of Scarlett's necromantic spells (Mental Skills) attacks inflicts on her target.

Retrieved from "https://venetica.fandom.com/wiki/Scarlett%27s_Basic_Attributes?oldid=7863"
Community content is available under CC-BY-SA unless otherwise noted.