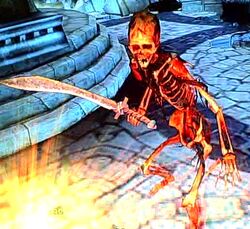 Scarlett will encounter Skeletons on her journey.

Many Skeletons are exactly what they appear to be: the bony remains of what was once a person. And many of them will simply lie there like a proper corpse. But even a corpse isn't always lifeless when Death's Daughter is around. Once Scarlett has learned the Eye of the Lost, she will be able to use The Passage to see the spirits or ghosts of such skeletons, and once she has learned The Whisper, she will even be able to speak with those lingering spirits. Finally, one she has learned Unworldly Clutch, these spirits will even willingly hand over their most guarded possessions. Scarlett will be able to send many of these restless spirits onto her father, the Final Guide.

(You may wish to keep track of any skeletons Scarlett passes early in the game, so she can return to speak with them when she has been granted the necessary Mental Skills. All those skills necessary to treat with non-hostile skeletons are skills granted to Scarlett at Gateway Idols, not skills she needs to learn from a teacher.)

A few Skeletons are not so benign. They may have been animated by a necromancer to defend him or some treasure. These will attack, usually with ancient swords, and are surprisingly spry for dead men. Such guardians await, for example, at all of the tombs holding St. Anthony's relics, in the sacred caves in the Juma Tribal Area, and in the Old Cathedral in the Inner City.

A couple of passive skeletons will have a final wish to die in battle, which Scarlett can grant by challenging them to a duel.

Retrieved from "https://venetica.fandom.com/wiki/Skeletons?oldid=6965"
Community content is available under CC-BY-SA unless otherwise noted.