The Skullbreak Tavern in the Arsenal District Edit 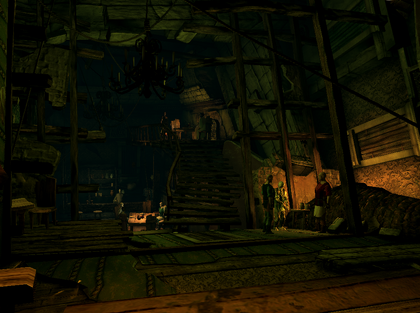 Skullbreak tavern is a central place in the Arsenal District for people to socialize and to relax from a day's hard labor. With its central location near the palace gates, and one of the highest points in the Arsenal District, Skullbreak Tavern attracts a highly diverse clientele. Dockyard workers frequent this tavern, but also Palace nobles, and even Juma clanspeople.

Skullbreak tavern appears to have a reputation of being fairly safe from the Doge's minions: The Juma people are afraid to leave this place for fear of the Princess' warriors, and even some surviving rebels use the tavern as a refuge.

When Scarlett first enters the Arsenal District, she is repeatedly advised (among others, by Leon) to visit Skullbreak tavern soon. To reach this place for the first time, she will have to ascend the stairs and fight off an ambush by Juma Warriors. If she completes the Platform quest, she can bypass the stairs; if not, she runs a risk of getting into a pincer ambush between Juma warriors and Rogues on her way down (note -- one possible way out is a conveniently located rope leading down from near the platform where the Rogues emerge).

Scarlett will make progress with two mandatory quests in Skullbreak Tavern -- The Voice of the Dead and Poison.

Retrieved from "https://venetica.fandom.com/wiki/Skullbreak_Tavern?oldid=7429"
Community content is available under CC-BY-SA unless otherwise noted.