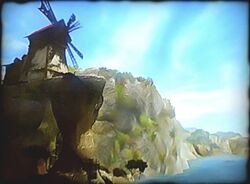 The Southern Bay, along the South Shore, is little more than a way station along the road from the mountains and San Pasquale where it reaches the shore at the bridge to Venice. A simple tavern and a handful of denizens are all that's here.

When Scarlett first arrives, the assassins will have locked almost all the area residents inside a single room at the tavern. Once she has open the door, they'll disperse to their usual locations.

Juan is the jovial innkeeper of the Windmill Tavern. His veracity may be open to question.

Yngvar is a warrior, a member of the Order of the Holy Seal, who, coincidentally, is awaiting the arrival of Benedict. He can provide training in combat, introducing combinations. He can also teach Scarlett new Physical Skills if she has the skill points available. Once the assassins are gone, he will hang out either down at the beach amid some old stone ruins, or in the tavern common room.

Hengfisk is a fisherman. Once released from the assassin's captivity, he'll return to his small camp and his boat on the beach. Once Scarlett fetches his boat paddles, he can provide her with transportation either to Venice's Water Gateway or to Creek Bay.

An unnamed Citizen locked in the room with the others will be happy to tell Scarlett about the Docks in Venice, though it will be some time before Scarlett will reach them.

Mirk, also locked in the room by the assassins, appears to be the tavern's resident barfly. He has little interesting to contribute.

Soros is a pigeon keeper who lives at Creek Bay. (Soros is not locked in the room by the assassins because he doesn't hang out at the windmill.)

The Southern Bay is a small way station along the road from the mountains and San Pasquale where it reaches the shore at the bridge to Venice. The road runs along the edge of a steep bluff overlooking a narrow beach. The bridge, when accessible, leads to Venice's Outer City. (When Scarlett first arrives at South Shore, the road will be blocked by large rocks, the work of the assassins who are waiting for her both outside and within the tavern. If Scarlett completes the How to Move Rocks quest, the road will be clear the next times she visits.) 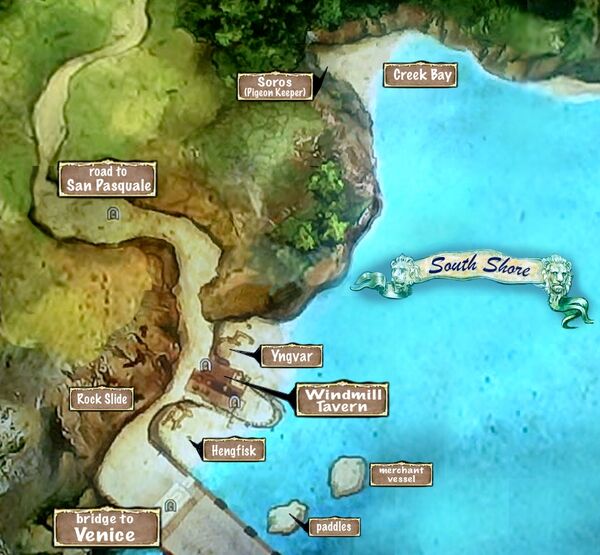 The fisherman, Hengfisk, can ferry Scarlett across the water to Venice's Water Gateway, or up to Creek Bay.

Once the Gondolas are available (about mid-way through the game), a Gondola can carry [[Scarlett] from the beach dock to any canal in Venice.

If Scarlett joins the Hooded Wings Guild, she'll be sent back here to pick up a package from a merchant vessel anchored at one of those small islands. 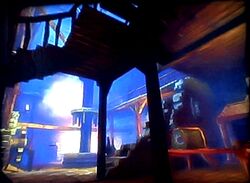 The roadside Windmill Tavern sits atop the windblown bluff overlooking the beach. Converted from an old mill, it's fans continue to turn the great gears inside to no discernible purpose.

Inside, a rotund innkeeper, Juan, tends the bar, and Mirk is his best customer. A bookshelf in the back contains information about beasts, if Scarlett doesn't already have that in her journal.

Yngvar will be happy to inform anyone who asks that the innkeeper is a less than honest sort who collects stolen property from his patrons and stashes it in a secret room.

This small cove and beach is home to Soros the pigeon keeper. His storage cave is surprisingly infested with Delvers.

How to Move Rocks[]

The Inkeeper, Juan, will ask Scarlett's help to obtain a carrier pigeon to send for workers to move the rocks and clear the road. This turns out to be slightly more complicated than one might expect.

Yngvar will tell about the innkeeper's secret room where he stashes stolen loot.

A Letter to Venice[]

Yngvar will ask Scarlett to take a letter to Rangar at the Order of the Holy Seal in Venice.

Hengfisk will need help getting paddles for his boat.

Pick up a package from a ship anchored here. (Hooded Wings guild only.)