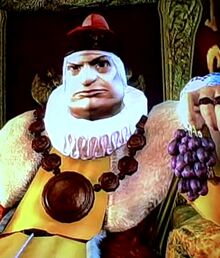 The Doge is the crowned ruler of the city-state of Venice. As such, he commands its wealth, city guard and harbors. He is also one of the Undead Five made immortal by the dark, forbidden magics of the Undead Archon.

The Doge is a very self-indulgent man, seeking an immortal life of idle debauchery. He routinely grants authority over parts of his city to other members of the Undead Five, when they request it, to search for the unknown mortal who may still pose a threat to them.

The Doge resides in The Palace, of course, high above Venice's Arsenal District.

Retrieved from "https://venetica.fandom.com/wiki/The_Doge?oldid=5900"
Community content is available under CC-BY-SA unless otherwise noted.