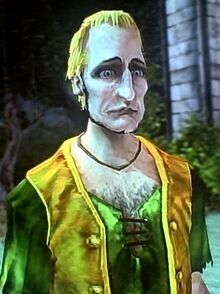 Scarlett has only to speak to Hengfisk, the fisherman at the South Shore, to be asked this favor. Scarlett first saw Hengfisk as one of the prisoners in the Windmill Tavern, whom she should rescue from his captors, Assassins. She can find him down on the beach, below and south of the tavern on the South Shore.

Scarlett needs to complete this quest. Hengfisk's boat is her only way to Venice with the road closed. He can also provide travel to Creek Bay for another quest.

Hengfisk as an injured leg. Worse, the Assassins broke the paddles he uses to propel his small fishing boat. A couple of paddles washed up on a small island just off the beach during the recent storm. He asks Scarlett to fetch those battles for them. 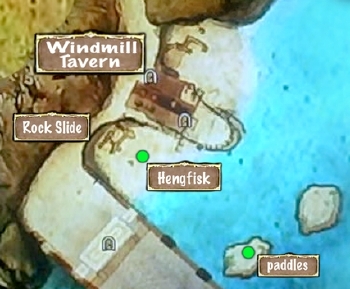 Scarlett just has to swim out to the island, pick up both paddles, swim back, and give them to Hengfisk. (Swimming is easy, just walk down the beach into the water, and Scarlett automatically switches to swimming (automatically she think any weapon she had in hand.) It doesn't matter how much weight she is carrying.)

There are some Flying Beasts flapping around over the island. There's no need for Scarlett to engage them at this time. If she just grabs the paddles and leaves, they shouldn't bother her. Without necromantic spells (Mental Skills) to reach them in the air, she's at a disadvantage.

Note that as Scarlett goes to talk to Hengfisk for the first time, some more Assassins may rappel down from the bridge on ropes to attack her.

Hengfisk can use his boat and paddles to take Scarlett to either Creek Bay or Venice, via the Water Gateway.

No change to Reputation.

Retrieved from "https://venetica.fandom.com/wiki/The_Injured_Fisherman?oldid=4352"
Community content is available under CC-BY-SA unless otherwise noted.