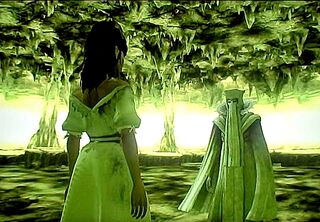 The Twilight World is the gateway to the afterlife, a way station between life and death, and the domain of Death, The Final Guide, a role currently performed by Scarlett's father. The Twilight World manifests in two different ways in Venetica:

First, it is an otherworldly landscape, a monochromatic realm a barren ground and surrealistic sky. Scarlett will reach this land in three different ways: first, Death may summon her there to speak with her. 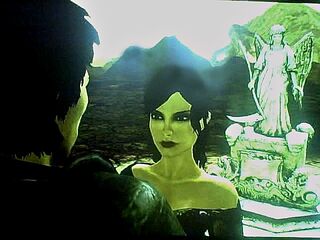 Secondly, she may use the Gateway Idols to travel to this Twilight realm intentionally. At those nexus between the more: twilight world, Scarlett may cross over into Twilight and meet with her lost love, Benedict (who will encourage her on her quest.) And finally, when Scarlett battles one of the Undead Five, she will find that after defeating their mortal form, she must then face their spirit in the Twilight World in a second battle of life and death.

A somewhat different manifestation of the Twilight World overlays the world of death onto the mortal realm. Scarlett enters this Twilight World anytime she dies. But death is no longer "the undiscovered country from whose bourn no traveller returns." Thanks to Scarlett's Twilight Energy, she may return to the world of the living after only a few seconds. (Scarlett can recharge her Twilight Energy by killing with the Moonblade.) 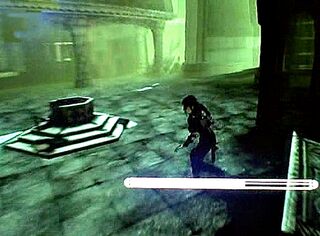 Scarlett may also slip into this Twilight World voluntarily by using The Passage, one of her most basic Necromantic Skills.

However she invokes this Twilight World imposed on the mortal world, whether through death or The Passage, Scarlett will be able to observe and move about the mortal world, unseen by mortal man or beast (only ghosts and Raging Ghosts can see her here.) Her view of the mortal realm i distorted, colorless but luminous. Time itself seems to slow down, in the living appear to move in slow motion. Although unseen, Scarlett is still restricted by the tangible restraints of the mortal world: she can't open doors, pass through walls, pick up objects, attack mortals or cast other spells without first returning to the mortal realm. She can, however see things not visible to her or others when she is mortal: The Nexus Portal, an otherworldly door the passes to another place in the mortal realm. Once Scarlett has learned the Eye of the Lost necromantic skill, she will also be able to see Ghosts, the spirits of some mortals who have carried here before moving on to the afterlife. Once she has learned The Whisper, she will even be able to speak with many of these spirits.

Retrieved from "https://venetica.fandom.com/wiki/Twilight_World?oldid=5389"
Community content is available under CC-BY-SA unless otherwise noted.