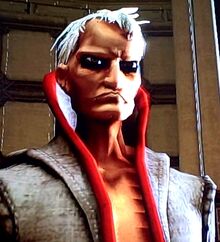 The Undead Archon is the immortal leader of the Undead Five. Once a mortal man, Victor made a pact with Death and of the Immortal Counsel to become the next Final Guide.

Anticipating his new role, Victor joined the Net of the Mask to study necromancy. After obtaining great power and a knowledge of necromancy, he broke his pledge with Death and committed an unthinkable crime: by combining powerful incantations of protection with a dark ritual of death, he exploited a loophole in the cosmic order that enabled him to achieve immortality, neither dead nor alive.

Before casting his spell, he carefully recruited four useful allies to join him in immortality and help him rule the mortal world as the Undead Five: the Mistress of Assassins for her powerful guild of assassins, Hector of Persia for his ships and armies, Princess Chiamaka for her fierce African warriors, and The Doge of Venice.

The Undead Archon now seeks the Black Grimoire, a dark book that will enable him to consolidate his immortality and rule all of the mortal world in darkness. If he succeeds in casting the Final Spell from that evil book, all will be lost. Even as he searches for that ancient, forbidden tome, he senses the presence of one mortal who might yet destroy his plans. And so he has ordered his four allies to search for this unknown mortal and kill him, without yet realizing about the one he senses is Scarlett.

Later on in the game when Scarlett defeats him he talks to someone of whom he calls "Father" that being of The Doge or of being Death therefore if Death was said to be his said father then that would make Scarlett his sister. Further evidence is that when The Undead Archon calls for his father then death appears, as if listening to his plead. but if no one knew about either Victor or Scarlett being the children of death then that would odden out the sources. It would also mean why they learned about Death having kids really fast.

Retrieved from "https://venetica.fandom.com/wiki/Undead_Archon?oldid=7138"
Community content is available under CC-BY-SA unless otherwise noted.