Most of Venetica is set in 16th-century Venice, a city that is a jewel of the European Renaissance, with inspiring architecture, artwork, trade and wealth. It citizens live among the eclectic buildings, narrow cobblestone streets that twist through the city, and broad canals that lead to the sea.

From its vaunted harbor on the Adriatic Sea, great sailing merchant ships traveled across the entire Mediterranean and beyond. Through the ports those ships visit, Venice trades with the great land caravans traveling to the exotic lands to the East, importing merchandise and people from all over the known world.

Throughout the story, Scarlett, the heroine, will visit selected parts of the city. Each is isolated until she achieves some specific goal required before she can advance from one district to another: the Outer City, the Inner City, the rising hills of the Arsenal District, the simple warehouses and quays of the Harbor, and finally the Doge's luxurious Palace. 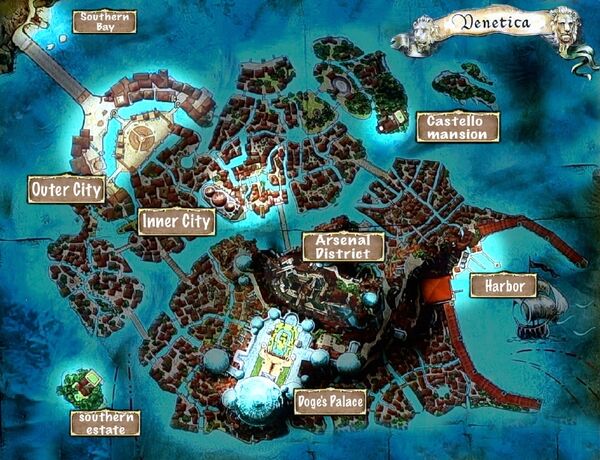 Not every venue in the city Scarlett will visit is shown on the surface map. The Water Gateway, the heroine's entry the city, is a subterranean area connected to the sea. There are old Catacombs beneath the Outer City, Inner City, and Arsenal District. These are a mixture of the city's sewer system and older building construction that since sank beneath sea level, partially flooding. Finally, the Doge's Palace boasts some pretty impressive dungeons.

As can be seen from the map, not all of Venice is open to the story. Large swathes of the city remain out of reach. But even so, there is ample room for Scarlett to roam freely through the streets and canals and buildings, mingling with various citizens, allies and enemies alike.

Without doubt, the fastest way to travel in Venice is the intricate network of canals, and the Gondoliers who wrote their gondolas through the canals, from station to station, day and night. First, Scarlett will have to earn the right to ride a gondola before she can use this rapid transportation system.

While most of the story centers on Venice, the city is not the only venue. Scarlett begins her story and the tiny mountain mining village of San Pasquale. Midway through the story, Scarlett will find reason to board one of the great sailing ships for a brief sojourn to Africa, too. But certainly, the sparkling city of Venice is the heart and soul of Venetica.

The story of Venetica will see Scarlett begin her heroic journey in her hometown, and ends among the citizens of Venice, with a short side trip to Africa.

Scarlett must earn access to each of these areas in turn, one after the other. To open the next area, she will have to fulfill certain conditions. Once she has opened an area, she can return to it at any time to complete unfinished business.

San Pasquale - The story begins in our heroine's hometown. Although Scarlett's birth was something of a mystery, she was raised in this simple mountain village, built about a copper mine.

Southern_Bay - To reach Venice, Scarlett must travel south to the coast and cross the bridge.

Water Gateway - Because the bridge is blocked by a rockslide, Scarlett will sneak into Venice through this old water gateway. The Mistress of Assassins now makes her lair there.

Outer City - The northern district of Venice, where trading caravans usually arrived via the bridge and markets flourish, is Scarlett's first taste at the big city.

Below the city's streets wait the partially flooded mixture of old construction and sewers known as the Outer City Catacombs.

Inner City - A more upscale area of Venice, home to more exclusive shops and the well-to-do. The district is under the control of Hector and his Persian army.

Beneath the city's streets wait the partially flooded mixture of old construction and sewers known as the Inner City Catacombs.

The Claw - Hector's Persian flagship galley. Three decks of this ship are accessible.

Arsenal District - The busier, working area of the city rises as a jumble of bridges and buildings scattered on a hill.

Below the city's streets wait the partially flooded sunken construction of the Arsenal Catacombs.

Harbor - The Port of Venice, where the great merchant sailing fleets from across the Mediterranean and beyond come to trade.

Juma Tribal Area - The Africa homeland of Princess Chiamaka and her tribesmen warriors. 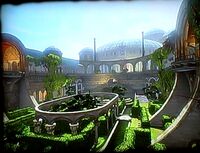 Palace - The Doge's magnificent complex of gardens and buildings, seat of his throne, sits high atop the Arsenal District. Currently the headquarters of both The Doge and the Undead Archon.

Beneath the opulent grandeur of the palace is the dark and brooding Palace Dungeon.

Retrieved from "https://venetica.fandom.com/wiki/Venice?oldid=7433"
Community content is available under CC-BY-SA unless otherwise noted.