The Water Gateway is a subterranean passage that Scarlett will use to enter the city of Venice for the first time after being ferried across the water from the Southern Bay by Hengfisk. Coincidently, it is also the lair of the Dervish Assassins and their undead Mistress.

The area is populated almost exclusively by Assassins of various skill levels.

Edmundo is being held prisoner. He identifies himself as a member of the Net of the Mask guild (though he's dressed in a style that will later be recognized as a gondolier.) He can teach Scarlett some elementary Mental Skills, her first chance to learn some necromancy from someone who's alive.

Dominicus is a Trader who apparently traffics with anyone, assassins included. He'll shows up again much later in the Arsenal District.

The Mistress of Assassins is the first of the Undead Five Scarlett will encounter in person.

There's not a lot that Scarlett has to do in the Water Gateway except reach the Water Tower that will provide entrance to the Outer City (though she will have two important encounters in that tower.) There is, however, opportunity to slay numerous assassins, pick up a little treasure, and meet the prisoner, Edmundo.

At the time Scarlett first visits here, she will not have any means to open locked doors. Fortunately, the first guard she encounters, an elite dervish, uses a Warhammer that is perfect for breaking down doors (and killing Grippers - the hammer works well against them, but they have a nasty attack that almost instantly kills Scarlett, so I recommend your moonblade or sword and rolling/dodging to kill them.) The three doors requiring special keys will resist this brute force method, and a locked chest will have to be left for now (though Scarlett is free to return and have a look inside once she's learned how to bypass locks.) 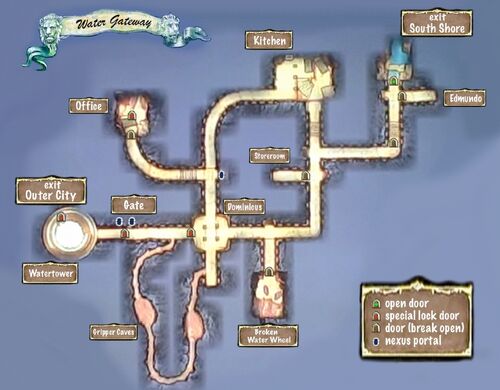 In the Kitchen, the cook (who is armed and dangerous) will bargain for his life by offering a ritual dagger that can be used to open the first of two doors leading to the Water Tower that require a special key.

In the Office of the chief assassin (not their Mistress), a special door requires deciphering a clue to learn the combination: the order to press certain stones on the wall is concealed in a seemingly useless recipe scroll on the desk. This time, the stones that must be pressed in the designated order are divided with two on each side of the door, so Scarlett will use a bit more boot leather pressing the combination. (As before, the stones are considered to be numbered left to right. The combination, from the recipe scroll, is 4-1-3-2.) Solving that will gain the wrench needed to open the gate that is the second locked door to reaching the water tower.

Strangely, neither the ritual dagger (key) nor the wrench are actually needed. The tunnels through the Gripper Caves bypass the first locked door (though the Grippers are dangerous to Scarlett at these early stages), and a pair of Nexus Portals can be used to bypass the gate mechanism.

There are no Quests initiated in the Water Gateway.

Retrieved from "https://venetica.fandom.com/wiki/Water_Gateway?oldid=8005"
Community content is available under CC-BY-SA unless otherwise noted.